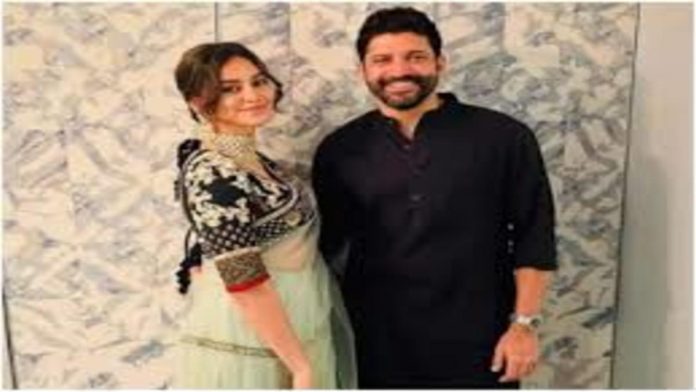 It all starts now! Farhan Akhtar and Shibani Dandekar have been dating for almost four years and are ready to take their romance to the next level. Yes, the big day is approaching, and the couple is getting ready to tie the knot for good. Farhan and Shibani will marry in a traditional wedding on February 19, followed by a registered marriage two days later, on February 21.

The couple’s family and close friends were photographed arriving at Farhan’s Mumbai residence as the pre-wedding festivities began. This evening, the bride-to-sister be’s Anusha Dandekar, her closest friend Rhea Chakraborty, and others were spotted on their way to the Mehendi ceremony venue. While the visitors appeared to be colour coordinated, it is believed that the evening was thrown by Shibani’s friends.

We reported earlier this afternoon that Farhan Akhtar and Shibani Dandekar will tie the knot according to Maharashtrian customs, however it appears that this will not be the case. According to the latest reports, the pair will have a vow ceremony rather than a nikah or Maharashtrian wedding. Yes!

“They wanted to keep things as basic and simple as possible,” a source close to the couple told India Today. The wedding guests have also been advised to dress in light colours such as pastels and whites. A nikah or a Marathi wedding will not be held. Instead, they’ve decided to do a private vow ceremony. Both have typed out their vows, which they will read out on February 19, the major wedding day.”

Honey Irani, Farhan Akhtar’s mother, confirmed their wedding and Mehendi ceremony to India Today, saying, “Shibani’s close friends have thrown her the Mehendi party, which is currently taking place.” We are overjoyed; the wedding will be held on February 19th. It will be a private gathering with just close family and friends.”