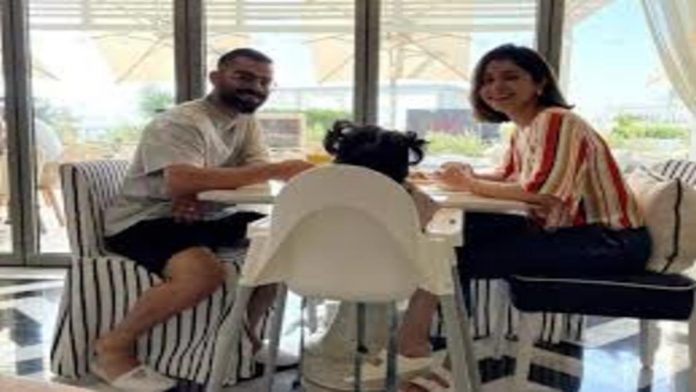 When a glimpse of Virat Kohli and Anushka Sharma’s daughter Vamika was shown during a cricket match in Cape Town, South Africa, fans were outraged. While the Indian cricket team was playing the third One-Day International, the official broadcaster of the sport shifted the camera to the stands, displaying Anushka Sharma and Virat Kohli’s daughter’s face. Fans were outraged and labelled it a breach of privacy because Virat and Anushka were so adamant about not revealing their daughter’s face in public and had given requests.

The telecast of Sunday’s game showed Anushka in the stands, holding baby Vamika. Before returning to the ground, the camera lingered on them for a few moments. Even as enraged fans took to social media to vent their frustrations, Virat and Anushka have expressed their disappointment.

Both of them wrote in a statement, “Hi guys! We realise that our daughter’s images were captured at the stadium yesterday and widely shared thereafter. We want to inform everyone that we were caught off guard and didn’t know that the camera was on us. Our stance and request on the matter stays the same. We would really appreciate if Vamika’s images are not clicked/published for reasons we have explained earlier.”

Fans were outraged and rushed to social media to vent their frustrations. “The broadcaster should have respected their privacy,” one tweet read, while another added, “It was so wrong of SuperSport to show Vamika’s face, especially when Virat and Anushka had specifically requested that it not be done.” “Well, honestly, it was a terrible thing for them to do, by not respecting the privacy they required!” another person tweeted.

Other social media users shared the photo, and fans chastised them for it, demanding that they remove it. Many fans encouraged others to report the tweets and requested that they be removed from official accounts.

During the match, Virat Kohli, who recently resigned as captain, dedicated his half-century to Vamika. He made a cradling gesture for her to commemorate his half-century. Anushka claps and yells for him in the footage that went viral online, kisses Vamika, and points to Virat.

Last year, Virat and Anushka welcomed Vamika, and the couple declined to reveal her photos, requesting that paparazzi not take her pictures, and sending out a thank-you message for not releasing her photos. “We want our child to have privacy, and we want to do everything we can to offer her the opportunity to live her life freely away from the media and social media.” We can’t restrict her movement because she’s older, so your help is needed. Please practise (refrain) in this matter. Thank you, in particular, to fan groups and online users who went out of their way to avoid posting photographs. It was thoughtful and mature of you.”

heyzo jav online free APAA-395 Tsutsu, take me out and pour your energy into it... - Suzu Monami, the most beautiful and naughty Japanese girl KAM-119 "Are You Really A Virgin...?" I Asked The Housework Part-timer To Pretend To Be A Virgin And In The Direction To Tickle My Maternal Instincts, The Devil Jarichin Part-time Job Who Is Fucking A Tadaman With A Married Woman Somehow's Voyeur NTR Material 4 Rino Yuki RCTD-493 If you're a father, try guessing your daughter's nakedness! - Busty Three Sisters SP MUDR-208 A damn cheeky female brat J* yelled at me, saying, "I'm third-rate as an uncle office worker, but only my dick is first-rate." - Nana Kisaki BANK-102 Hirate Mana BEST