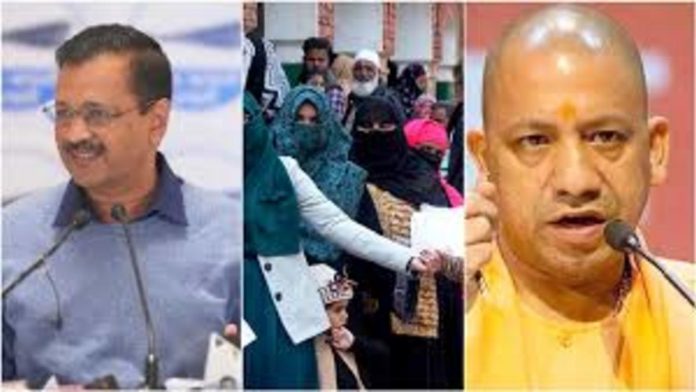 A poll of exit surveys indicated after voting ended for state elections that are viewed as the semi-final ahead of the 2024 national election that Arvind Kejriwal’s Aam Aadmi Party (AAP) will sweep Punjab and Uttar Pradesh will remain solidly with the BJP.

A word of caution: exit polls sometimes get it wrong.

According to six exit polls, the Yogi Adityanath-led BJP is poised to win another term in Uttar Pradesh by a landslide. The BJP and its allies have 241 of the state’s 403 seats, with Akhilesh Yadav’s Samajwadi Party coming in second with 142 seats, according to an aggregate of exit polls.

An average of 10 surveys indicates a surprising success for AAP in its first big state, Punjab. According to exit polls, AAP has 63 seats in Punjab’s 117-seat legislature, with a 59 percent majority. If this happens, AAP will take power in the first full state; Delhi, where it has been in power since 2015, is partly under the Centre.

The ruling Congress is set to finish second with 28 seats in the assembly, the polls say, indicating that the party may pay the price for intense infighting; in the months preceding the vote, Navjot Singh Sidhu bickered with veteran Amarinder Singh as well as the man who replaced him, Charanjit Singh Channi.

With its previous ally, Akali Dal, expected to win 19 seats, the BJP, which teamed up with Amarinder Singh, may remain a small influence in Punjab.

A survey of 11 exit polls in Uttarakhand forecasts a tight race, with the BJP in the lead but both the ruling party and the Congress within striking distance of power. The BJP could win 35 seats and the Congress 32, say exit polls. According to polls, the AAP may win one seat.

Exit polls predict a close race in Goa, with the BJP and the Congress both predicted to win 16 of the state’s 40 seats, far short of the required majority of 21. Ten exit polls gave Mamata Banerjee’s Trinamool three seats, implying that it could wind up becoming the kingmaker in a majority contest. Despite being the single-largest party in the 2017 election, the Congress was unable to gain power due to critical crossings.

The last round of voting in Uttar Pradesh today wrapped month-long polling in UP, Punjab, Goa, Manipur and Uttarakhand.

The counting of votes will take place on Thursday (March 10).