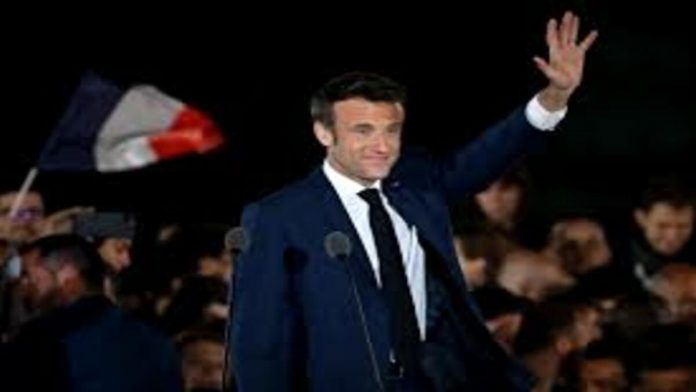 On Sunday, Emmanuel Macron easily defeated far-right competitor Marine Le Pen, averting a political earthquake in Europe, but admitting to discontent with his first term and promising to make repairs.

As the results displayed on a huge screen near the Eiffel Tower in the Champ de Mars park, his fans erupted in laughter.

Leaders in Berlin, Brussels, London, and elsewhere hailed his victory over Le Pen, a nationalist and eurosceptic.
Macron was on track for a respectable 57.4 percent of the vote with 97 percent of votes counted, according to interior ministry estimates.

However, in his victory speech, he admitted that many people voted for him solely to keep Le Pen out, and he promised to address the widespread perception that the French are losing their living standards.

“Many people in this country voted for me not because they agree with my beliefs, but to keep the far-right out. I want to express my gratitude and acknowledge that I will owe them a favour in the future “he stated

“No one in France will be forgotten,” he stated in a statement that had already been sent by senior ministers on French television stations.

Economic problems have risen to the forefront of the campaign after two years of disruption caused by the virus and rising energy prices worsened by the Ukraine war. The rising cost of living is putting a pressure on the country’s poorest citizens.

“He needs to be closer to the people and listen to them,” Virginie, 51, a digital sales worker, said at the Macron event, adding that he needed to overcome a reputation for arrogance and soften his “Jupiterian” leadership style.

Le Pen, who had been behind Macron in opinion polls by just a few points at one point during the campaign, promptly conceded defeat. But, with legislative elections coming up in June, she promised to keep fighting.

“I will never betray the French,” she declared to her supporters, who chanted “Marine! Marine!”

In a country where deep political divisions have been exposed by an election in which extreme groups performed strongly, Macron should expect little or no grace period. Many expect public protests to erupt again as he pushes through pro-business policies, as they did during his first term.

“Because the president was reelected, there will be continuity in government policy,” stated Health Minister Olivier Veran. “However, we have also heard the word of the French people.”

The outcome of Macron’s current campaign will be determined by the next parliamentary elections. Le Pen is seeking a nationalist alliance, which might lead to her collaborating with rival far-rightists such as Eric Zemmour and her niece, Marion Marechal.

Hard-left Jean-Luc Melenchon, who has emerged as the most powerful figure on the left in French politics, has said that he deserves to be Prime Minister, forcing Macron into an awkward and stalemate-prone “cohabitation.”

“As Prime Minister, Jean-Luc Melenchon. That would be entertaining. Macron would be irritated, but that is just the point “Philippe Lagrue, a 63-year-old technical director at a Paris theatre, voted for Macron in the run-off despite first supporting Melenchon.

Macron’s triumph was welcomed as a reprieve for conventional politics, which had been shaken in recent years by Britain’s exit from the European Union, Donald Trump’s election in 2016, and the rise of a new generation of nationalist leaders.

“Bravo Emmanuel,” tweeted European Council President Charles Michel. “We need a strong Europe and a France that is fully committed to a more sovereign and strategic European Union in this turbulent time.”

In the early hours of Monday, Ukraine President Volodymyr Zelenskiy tweeted, “Congratulations to the President and a loyal friend @EmmanuelMacron on the election victory.”

The dissatisfaction with Macron was reflected in a predicted abstention rate of roughly 28%, the highest since 1969.

Initial polling revealed a substantial divide in the vote, both in terms of age and socioeconomic status: According to an Elabe poll, two-thirds of working-class voters favoured Le Pen, while similar proportions of white-collar executives and retirees backed Macron.

During the campaign, Le Pen focused on the rising cost of living and Macron’s occasionally brusque demeanour as two of his major flaws.

She promised steep fuel tax cuts, a 0% sales tax on necessary commodities such as pasta and diapers, income tax exemptions for young employees, and a “French first” approach to jobs and welfare.

At the Le Pen event, Adrien Caligiuri, a 27-year-old project manager, stated, “I’m startled to see that a majority of French people want to reelect a president who has looked down on them for five years.”

Meanwhile, Macron cited Le Pen’s past fondness for Russia’s Vladimir Putin as evidence that she could not be trusted on the international arena, while asserting that she still has intentions to leave the European Union, which she rejects.