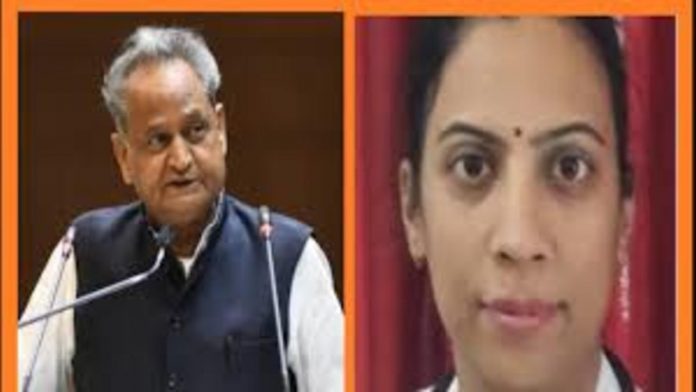 Following the suicide of a doctor in Dausa, Rajasthan Chief Minister Ashok Gehlot fired Dausa SP Anil Kumar on Wednesday, despite the doctor’s husband accusing local BJP leaders of pressuring police to file a FIR against his wife, prompting her to commit suicide.

On Monday, Asha Bairwa, 22, died after giving birth at Anand Hospital in Lalsot, Dausa. Her husband, Laluram Bairwa, and relatives returned to the village with her body after her death, but later returned to the hospital with the body and some local BJP leaders. As the protest grew louder, local police arrived and assured the demonstrators that appropriate action and investigation would be taken.

Dr. Archana Sharma and her husband, Dr. Suneet Upadhyaya, were later arrested and charged with murder under IPC Section 302 (murder). The couple ran the Anand Hospital.

Dr Sharma left a note and committed suicide on Tuesday, apparently disturbed by the developments and the FIR. “I adore my husband and children,” she wrote in the note. Please don’t bother them after I’m gone. I have committed no wrongdoings and have not killed anyone. PPH [Postpartum haemorrhage] is a well-known complication, so don’t be so hard on doctors about it.”

“Perhaps my death will serve as proof of my innocence.” Don’t bother doctors who aren’t guilty of any wrongdoing. “Please,” she pleaded.

Dr. Upadhyaya said in a video released on Wednesday that Asha Bairwa had a normal delivery but suffered massive PPH two hours later. “We tried for two hours to save her and gave her two units of blood, but we couldn’t save her.” “Her relatives watched how hard we tried to save her and acknowledged, with folded hands, that we attempted to save her but it was their misfortune,” he stated in the video.

Joshi has been harassing them “for the last 5-6 years, ever since we started this hospital in 2016,” Dr Upadhyaya said when contacted. “We filed a complaint against him twice, but no FIR was ever filed against him by the police.” A baby was admitted to our hospital a few years ago and died two days later in Jaipur. “While the family remained silent, Joshi showed up at the hospital and caused a commotion,” he said.

“Before that, Manoj Joshi, one of his relatives, had called and blackmailed us, demanding money. “I gave the police that audio recording, but they didn’t file a FIR,” he explained.

“Joshi is a well-known goonda who is protected by Dr Kirodi Lal Meena and has previously assaulted a Deputy Superintendent of Police. Second, he colludes with a local journalist from a major newspaper, who files news reports that include his version of events. As a result, the cops never file a FIR on our complaints,” he claims.

He claimed that the Dausa police lodged a FIR against his wife Archana under Joshi’s pressure, and that when his wife read the news of the FIR in the newspapers, “she got scared.” “She was afraid they were going to throw her in jail.” “I tried to persuade her that she wouldn’t be thrown in jail right away,” Dr. Upadhyaya said. “Perhaps her fear didn’t go away, and she didn’t tell me and committed suicide.”

A second FIR was filed against Joshi and others based on his complaint, charging them with abetment of suicide, extortion, and 388 of the Indian Penal Code (extortion by threat of accusation of an offence punishable with death).

He claimed in the FIR that his wife died as a result of “vulture politics.” Joshi had turned off his phone and was unavailable for comment. Calls to Dr. Kirodi Lal Meena were not returned.

According to sources, the hospital has been embroiled in a power struggle for some time between local MLA Parsadi Lal Meena, who is now the health minister in the Gehlot government, and Dr Kirodi Lal, a satrap who was previously an MLA from the same seat.

Meanwhile, Chief Minister Ashok Gehlot described the doctor’s alleged suicide as “deeply saddening” and said the “guilty will not be spared,” while private hospitals across Rajasthan remained partially closed on Wednesday in protest.

Gehlot fired the SP, suspended the SHO of the Lalsot police station, and promoted the Circle Officer to APO, according to orders issued late Wednesday. Dinesh Kumar Yadav, the Divisional Commissioner, has been tasked with conducting a “administrative investigation” into the events. In addition, Gehlot formed a committee led by Additional Chief Secretary (Home), Abhay Kumar, to make recommendations for preventing future incidents.

A group of doctors from the Indian Medical Association (IMA) had visited Gehlot at his home earlier in the day. The IMA also condemned the incident, and some doctors have called for a 24-hour state-wide medical strike.