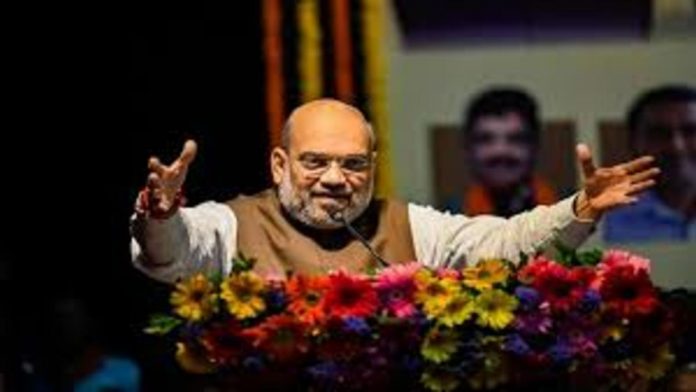 During Prime Minister Narendra Modi’s seven-year tenure, he changed the “scale and size” of the government’s initiatives and gave GDP “a human face,” according to Home Minister Amit Shah. The BJP chose Modi as a prime ministerial candidate at a time when the country was experiencing a major leadership crisis, according to Shah, who created Gujarat as a model state.

“Terms such as good governance, change, reform, or economic progress will not fix the country’s problems.” It’s not only administration; the leader must also manage growth, protect and advance the country’s culture, and ensure security — all of which can be accomplished only by a leader who has the support of the people. Only those who come from the bottom and feel the suffering of the poor can make a difference,” Shah stated at Rambhau Mhagi Prabodhini’s national conference on Delivering Democracy: A Review of Narendra Modi’s Two Decades as Prime Minister.

Modi’s education reforms in Gujarat, according to the Home Minister, set the groundwork for the state’s success. “For mentioning this, I’ve been trolled..” But I’d want to emphasize something. Koi desh vikas nahi kar sakta… Unpadhon ki fauj lekar koi desh vikas nahi kar sakta… Those who are unaware of their constitutional rights and responsibilities are unable to contribute to the nation’s growth.”

“This (his past identical remarks) was taken as my being against the illiterate. I’m not against them; in fact, I feel they’re the system’s victims. “Educating children is the system’s obligation, and those who refuse to do so are irresponsible,” Shah remarked.

In an interview with Sansad TV marking 20 years of Narendra Modi in office, first as Gujarat’s chief minister and later as India’s Prime Minister, Shah discussed how the present government has helped to increase school enrollment. He has described illiterate individuals as a “drag on the country” and stated that “illiterate people could never become a good citizen of India.”

He told the conference that, while our forefathers saw a multi-party system as the best option for Indian democracy, people made the brave decision to elect Modi’s BJP to power “after the nation witnessed withering governance, failure in protecting the nation, and when corruption and scandals had become routine affairs in the government.”

“In 2014, there was a lot of doubt in people’s minds about whether the multi-party system would be successful in defending democracy,” he said. People knew Modi’s track record after he took over the reins of Gujarat in 2001, Shah said, citing how he made Gujarat the first state to have 24-hour power, as well as development in the education and agriculture sectors.

“Everyone began to believe that if it could happen in Gujarat, why couldn’t it happen everywhere… so they gave Modiji a chance.”

Modi’s decisions, Shah added, are not “selfish,” and that decisions like demonetisation were made quickly in order to pave the way for the country’s epayment system. He went on to say that decisions like repealing Article 370 had no impact on peace and order.

Because he hails from a poor family and saw his “mother fighting with fire and smoke in the kitchen,” Shah believes Modi can implement programs like the Ujjwala Yojana.

“He has given the GDP a human face,” he continued.

Shah reacted angrily to claims that Modi’s policies were copied from prior administrations, claiming that the Prime Minister has changed the size and scope of the programs. When past governments limited the number of people who may benefit, Modi has made (the initiatives) available to all impoverished families in the country, whether they need toilets, housing, LPG connections, or drinking water.

Devendra Fadnavis, a BJP politician and former Maharashtra chief minister, described Modi as the country’s “government maestro” while speaking at the occasion. Fadnavis noted that Modi had followed in the footsteps of BJP ideologue Deendayal Upadhyay in bringing the poor’s welfare to the forefront of politics and working hard to improve the delivery system and network. “Under his leadership, the country experienced a growth rate that took into account the poor and their well-being, which sparked economic expansion by increasing demand. The governance and delivery system will be put on autopilot in the coming days “According to Fadnavis.

On the occasion, BJP Rajya Sabha MP and vice-chairman of the Rambhau Mhalgi Prabodhini, a think tank affiliated with the BJP, also addressed.