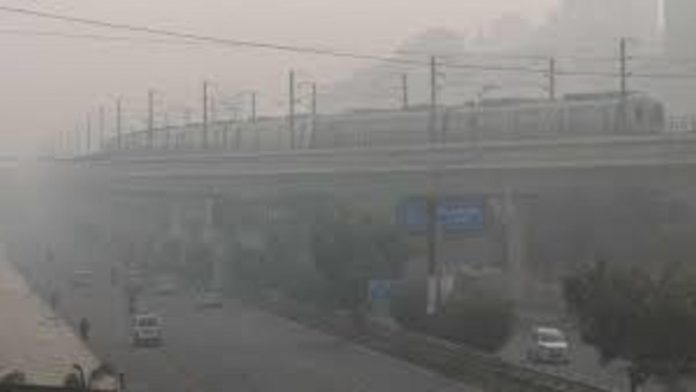 The Commission for Air Quality Management said late Tuesday night that all schools and colleges in Delhi and adjacent cities should be closed until further notice. The directive, which is one of several, comes as the national capital region fights a hazardous fog that has shrouded the city since Diwali.
As a result, educational institutions will likely resume online classes, as they did during the Covid lockout.

The CAQM also advised NCR state governments (Delhi, Haryana, Rajasthan, and Uttar Pradesh) to enable at least 50% of employees to work from home until November 21 in a nine-page order.

The CAQM (a subcommittee of the Central Pollution Control Board) ordered that private companies in the Delhi NCR be “encouraged” to allow at least 50% of their employees to work from home.

In addition to WFH directives and the closure of presential classes for schools and universities, the order calls for “severe penalties on persons/organizations liable for stacking construction materials… or rubbish on roadways in NCR” and “enhance availability of road-sweeping machinery in NCR.”

Construction and demolition projects in the Delhi NCR have also been halted until November 21, with the exception of railway services/stations, Metro operations, airports and bus terminals, and national security or defense-related activities and projects.

Only five of the 11 thermal power plants in the Delhi NCR would be operational.

Trucks are also not allowed to enter the national capital, except for those transporting critical items, according to the NCR states and Delhi. This is also only valid until November 21 and is subject to change.

Vehicles that are more than 15 and 10 years old, respectively, will not be permitted on the roadways. The decree states that drivers of vehicles detected without a valid emission control certificate will be arrested.

The Supreme Court has raised concerns about the Delhi government’s and the central government’s lack of emergency preparedness and reaction to the air quality problem, prompting the CAQM decision.

At an emergency conference convened by the Supreme Court yesterday, the Delhi government proposed a weekend lockdown and WFH for a week; officials from the central also attended.

The Delhi administration also suggested that construction and industrial activity in the city be put on hold.

“We’ve advocated a weekend lockdown, and we’re prepared. Our strategy will now be determined by the court’s instructions “Gopal Rai, the Delhi Environment Minister, stated.

The Supreme Court ordered the meeting between the Delhi administration and central officials after the former claimed that stubble burning by farmers in neighbouring states was a substantial cause of air pollution in the metropolis.

After the centre told the court that stubble burning contributed to barely 4% of air pollution, the court ruled there was “no basis for a hue and cry concerning field fires.” The Delhi administration, on the other hand, replied by pointing out that the peak months of October and November were not taken into account.

The court had previously chastised the governments for the air crisis, saying, “You see how horrible the situation is…. even in our homes, we are wearing masks.”

The state government admitted in court that breathing Delhi air is “equivalent smoking 20 cigarettes a day,” stressing, “We concur to the gravity of the matter.”

The CAQM also asked for a ban on using diesel generators (unless in emergencies) and a three- to four-fold increase in parking rates, as well as a ban on coal burning in open-air cafés, last week.

For the past seven days, Delhi and its surrounding districts, including Gurgaon, Noida, and Ghaziabad, have been drowning beneath a deadly blanket of dirty air, which began on November 4 with Diwali.

Thousands of people in these and other locations let off firecrackers in defiance of directives from the Delhi, Haryana, and Uttar Pradesh governments, contributing significantly to the appalling deterioration of air quality.

According to the Central Pollution Control Board, the overall AQI in Delhi was 397 at 12.27 a.m., bordering on the’severe’ category; readings above 400 are classified as’severe’ or ‘hazardous.’

The contaminated air contains high amounts of PM2.5 particles, which can cause cardiovascular and respiratory disorders, including lung cancer, at these levels.