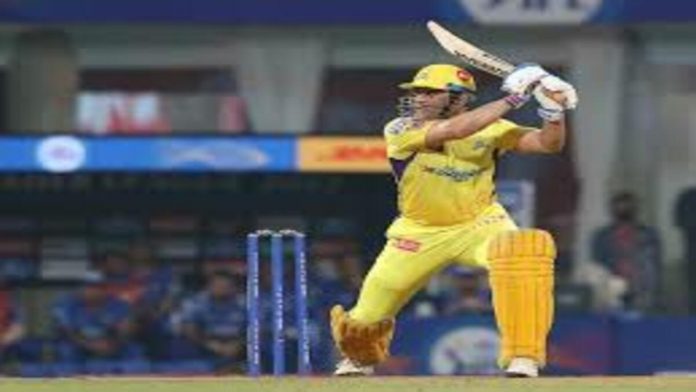 On Thursday, Chennai Super Kings beat Mumbai Indians by three wickets at the DY Patil Stadium in Navi Mumbai, securing their second victory of the IPL 2022 season. Mumbai Indians, the most successful team in IPL history, have lost all seven of their matches so far this season.

MS Dhoni went undefeated on 28 to lead CSK to a dramatic win. CSK needed 17 runs off the last over, and Dhoni hit one six and two fours off Jaydev Unadkat as MI lost for the second time.

Ambati Rayudu, who top-scored with 40, and Robin Uthappa, who slammed a rapid 30, both made significant contributions, but it was MS Dhoni’s effort in the end that helped CSK win off the final ball of the match.

Mukesh Choudhary dismissed Mumbai Indians openers Rohit Sharma and Ishan Kishan for ducks in the first over of the innings after CSK captain Ravindra Jadeja won the toss and elected to bowl. MI were never able to recover from the two blows, and despite a cameo from Suryakumar Yadav and a brave fifty from Tilak Varma, they could only manage 155 for 7 in a match they sorely needed to win in order to collect their first points of the season.

Daniel Sams removed Ruturaj Gaikwad for a first-ball duck as Mumbai Indians got off to a solid start in their defence of a modest score. Ruturaj Gaikwad, the IPL 2021 Orange Cap winner, has had a dismal start to the season. Gaikwad has failed to score runs, with the exception of a half-century against Gujarat Titans.

Mitchell Santner was promoted to No. 3 as a pinch-hitter, but he did not contribute much, and Sams took another wicket in his second over to further frighten CSK.

Two seasoned and experienced campaigners, Robin Uthappa and Ambati Rayudu, did brilliantly to get the CSK chase back on track, adding 50 for the third wicket.

Before being removed by Jaydev Unadkat, Robin Uthappa escaped a near caught and bowled opportunity by Hrithik Shokeen, giving the Mumbai Indians a glimmer of hope.

With CSK still needing 90 runs, Shivam Dube joined Rayudu in the middle, and the game was in the balance. After Daniel Sams dismissed Dube for the second time, the pressure was now on Rayudu and captain Ravindra Jadeja.

In his penultimate over, Sams struck again, dismissing the dangerous Ambati Rayudu for 40 runs.

With Ravindra Jadeja and MS Dhoni at the bat, the Super Kings still had a chance to attain their goal of 54 from 5.1 overs. Riley Meredith, on the other hand, put MI ahead when he dismissed Jadeja with a slower ball.

CSK needed 48 off the final four overs and will be bowled by Jasprit Bumrah and Jaydev Unadkat. MS Dhoni and Dwaine Pretorius had their work cut out for them. Pretorius fell in the first ball of the last over, but MS Dhoni remained composed and guided CSK to victory, hitting six and two boundaries to give the reigning champions a dramatic victory.

The Mumbai Indians have had a disastrous start to the IPL 2022 season. They had lost their first six games of the season before facing the reigning champions, Chennai Super Kings, who had not fared much better. CSK, on the other hand, had at least one victory before Thursday evening.

MI’s top openers, Rohit Sharma and Ishan Kishan, wanted to get off to a solid start. Mukesh Choudhary, though, removed both men for ducks in the first over. MI was shaken, but they had hoped that their middle-order would fire.

Dewald Brevis made a blistering start to his IPL debut, but he too failed, falling to Mukesh Choudhary’s third wicket of the evening as Mumbai Indians were reduced to 23 for 3 at the conclusion of the third over.

For the Mumbai Indians, Suryakumar Yadav was looking excellent. After missing the first two games due to injury, he has been in fantastic form. Despite the early punches, Suryakumar remained combative and seemed to set the tone for a comeback, but he was MI’s fourth man down, succumbing to Mitchell Santner’s left-arm spin.

The Mumbai Indians seemed to be on the mend when Tilak Varma and rookie Hrithik Shokeen attempted to steady the ship, but their fifth-wicket partnership lasted just six overs. Dwayne Bravo dismissed Hrithik Shokeen for 25 off 25.

Before being removed by Maheesh Theekshana, Kieron Pollard, who announced his retirement from international cricket on Wednesday, came out and hit a four and a six. Tilak Varma stood powerless at the other end as Daniel Sams got Bravo’s second wicket.

Tilak Varma, in his debut IPL season, batted like a seasoned player, scoring a well-deserved half-century to climb into the top five run scorers. The youthful left-handed hitter put up a strong showing, and a few of his veteran teammates may learn a thing or two from him.

Despite a top-order collapse, MI was able to achieve a decent total thanks to dropped catches and general sloppy fielding by CSK.