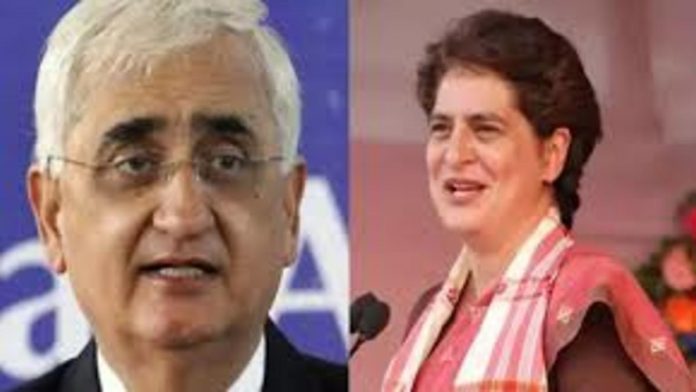 Former Union minister Salman Khurshid said on Sunday that the Congress will not make an alliance with any other party and would contest the next Uttar Pradesh Assembly election under the leadership of Priyanka Gandhi Vadra.

The Congress, according to Salman Khurshid, has not yet decided on its chief ministerial candidate, but would run candidates for all 403 assembly seats in Uttar Pradesh.

“The party will not form alliance with any party. We will contest the elections with firm belief. Party workers will go to each constituency to know the problems being faced by the local people,” Salman Khurshid said.

Salman Khurshid, who was in Agra to meet with people in order to develop the party’s platform, said it will contain the voices of ordinary people. “The party members have been visiting assemblies and trying to contact people and know problems being faced by the locals,” he said.

“We have visited other districts such as Ayodhya, Jhansi, Gorakhpur, etc and on Sunday in Agra, interacted with the natives of Tora village. People complained about several issues such as pension for widows and old people,” Salman Khurshid said.

People grumbled about rising electricity prices in Agra city, rations, and other basic difficulties during the conversation, according to the senior Congress politician.

“It doesn’t indicate that young leaders are quitting Congress,” Salman Khurshid said when asked about figures like Jitin Prasad leaving the party.