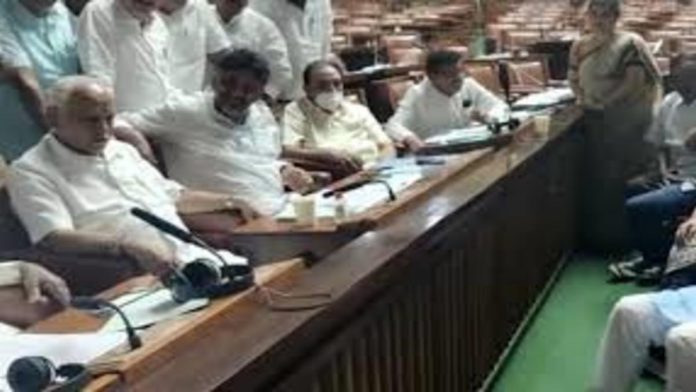 Congress legislators in their protests against BJP leader KS Eshwarappa’s controversial comment on replacing the national flag with a saffron flag have spent a night in Karnataka assembly even after it was adjourned due to the opposition’s protests.
The Congress has demanded sacking of the minister in their protests over the remark.

“We tried to convince the opposition party leaders for around two hours. We told them to not sleep here in the assembly. But they have already decided. Speaker also tried to convince. We have tried our best but they did not agree. We will try to convince them tomorrow also,” said former CM Yediurappa.

Even Karnataka Congress members including the state unit chief DK Shivakumar were seen having dinner at the assembly canteen later in the day.

Addressing the reporters outside the assembly, opposition leader Siddaramaiah even accused the saffron party and Rashtriya Swayamsevak Sangh (RSS) of insulting the national flag and told that the Congress legislature will hold “day and night” protests to take the matter to a “logical end”.

Given zero interference by the governor in the matter he said, “The Chief Minister is also not taking action against Eshwarappa, the RSS is implementing its hidden agenda through Eshwarappa”.

In the mean time, KS Eshaarappa who has sparked the controversy with his comments said that there us no ground for is resignation and said he is a real patriot who even went to jail during the National Emergency.

He even demanded the resignation of state Congress chief DK Shivakumar by accusing him of misusing the national flag for protesting.

Last week, Karnataka BJP leader KS Eshwarappa in his statement said that the “Bhagwa dhwaj (saffron flag) may become the national flag in future and may be raised from the Red Fort then”.
However, he had mentioned that currently tricolour is out national flag and must be respected by everyone.