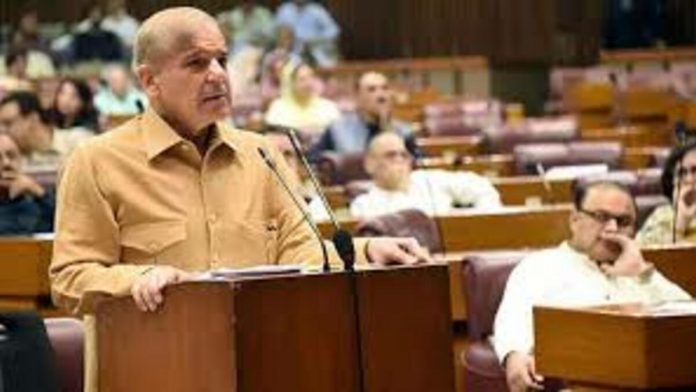 Shehbaz Sharif, Pakistan’s Prime Minister, raised the issue of the abrogation of Article 370 in Kashmir in his inaugural speech on Monday, claiming that the people in the Valley were bleeding and that Pakistan would provide them with “diplomatic and moral support” in addition to raising the issue at every international fora.

The 70-year-old leader, who took over from Imran Khan following a high-stakes political battle, said he wants good relations with India, but that won’t happen until the Kashmir issue is resolved.

He stated that neighbours are not a choice, but rather something with which we must live, and that Pakistan’s relations with India have been strained from the country’s founding.

When India revoked Article 370 in August 2019, he chastised Khan for not making “serious and diplomatic efforts.”

Kashmiris’ blood is running down the streets of Kashmir, and the Kashmir Valley is a sea of red “Shehbaz Sharif, Nawaz Sharif’s younger brother and previous three-time prime minister, claimed as much.

He stated a wish for improved relations, but India linked it to the Kashmir issue.

“We desire good relations with India,” he added, “but lasting peace will not be possible until the Kashmir problem is settled,” adding that Pakistan would continue to provide political, diplomatic, and moral assistance to the Kashmiri people.

“At every opportunity, we shall speak up for our Kashmiri brothers and sisters. We will provide diplomatic and moral support to them “Added he.

Shehbaz further requested that Prime Minister Narendra Modi come forward to address the Kashmir issue so that the two countries can focus on poverty, unemployment, medical shortages, and other challenges.

“Why do we want future generations to be harmed? Come, let us address the Kashmir issue in accordance with UN resolutions and the expectations of Kashmiris, so that poverty on both sides of the border can be eradicated “Added he.

Ties between India and Pakistan have deteriorated since a terror attack on the Pathankot Air Force base in 2016 by Pakistan-based extremist groups. The relationship deteriorated further after other attacks, including one on an Indian Army camp in Uri.

The relationship deteriorated after India announced in August 2019 that it would withdraw Jammu and Kashmir’s special powers and divide the state into two union territories.

It also halted all air and land connections with India, as well as commercial and railway services.

India has stated that it wants regular neighbourly ties with Pakistan in a free of terror, animosity, and violence environment. According to India, it is Pakistan’s responsibility to establish an environment free of terror and animosity.