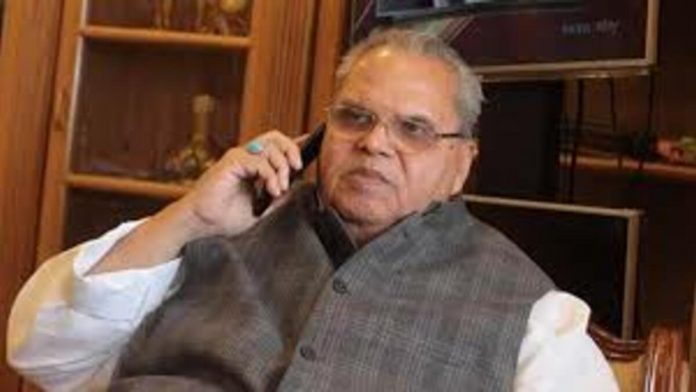 On Thursday, the CBI lodged two charges in the affair and conducted searches at 14 places, six months after former J&K Governor Satya Pal Malik alleged he was paid Rs 300 crore in bribes to clear two files, including one involving an RSS commander.

IAS official Naveen Choudhary, the then-chairman of CVPPPL; MD MS Babu; Directors M K Mittal and Arun Mishra are among the accused. Patel Engineering Ltd is the company implicated in the case. In a FIR filed in Jammu on Thursday, they are all named as suspects.

Anil Ambani’s RGIC and Trinity Reinsurance Brokers Ltd were identified as defendants in a separate FIR filed in Srinagar on Wednesday.

“The CBI had registered two separate cases on the request of the J&K government on allegations of malpractices (I) in awarding contract of J&K Employees Health Care Insurance Scheme to a private company & release of Rs 60 crore (approx.) in the year 2017-18 and (II) in awarding contract of civil works of Kiru Hydro Electric Power Project (HEP) to a private firm in the year 2019,” the CBI said in a statement.

Last month, J&K LG Manoj Sinha said that Malik’s claims were serious, and that the government had chosen to turn the investigation over to the CBI. “We have given our assent to the CBI for inquiries in both situations,” he told reporters in Jammu, “since a person holding high position has mentioned something.” “And after the investigations, the truth will be revealed.”

Last year, Malik, who is presently the Governor of Meghalaya, filed a corruption complaint against a top RSS official. He said that as governor of J&K, he got two files, one about “Ambani” and the other concerning a “RSS functionary.”

“One of the secretaries informed me that they are dirty transactions, but that he can collect Rs 150 crore from each of them.” “I informed him that I had come to J&K with five kurta-pajamas and that I would depart with just those,” he remarked at a Jhunjhunu event in Rajasthan. “I informed Prime Minister Narendra Modi, who instructed me that no compromise on corruption should be made.”

While Malik has been silent about the files, he did terminate a partnership with RGIC in October 2018 to offer health insurance to government workers. The other issue concerned civil works for the Kiru Hydel Power Project.

“The Finance Department and the Anti-Corruption Bureau were contacted for reports on these problems. The responsible authority in the J&K government has decided to send these instances to the CBI for inquiry after considering these findings,” it added.

In the case of RGIC, the CBI FIR states that the allegations made by the UT administration “prima facie disclose that unknown officials of the Finance Department of the Government of J&K, by abusing their official position in conspiracy and connivance with Trinity Reinsurance Brokers Ltd, Reliance General Insurance Company Ltd, and other unknown public servants and private persons have committed the offences of criminal conspiracy and criminal misconduct to cause pecuniary adv”

The government had recruited Trinity as a broker for finalising group health insurance for J&K government workers, according to an investigation by the UT administration. However, Trinity’s procurement procedure resulted in just one bidder, Reliance.

An inquiry report given to the UT administration on February 8 by the J&K Anti-Corruption Bureau states that no case has been made out in the issue. “…the topic verification thus undertaken at this bureau with reference to government workers’ Health Care Insurance Scheme is closed as no irregularity was identified in the issue,” according to the report.

In the instance of the Kiru Hydel Project, the CBI FIR said that the J&K ACB and the electricity department had undertaken an inquiry into the problem.

“A review of these reports reveals that guidelines regarding e-tendering were not followed in the award of the civil works package of the Kiru Hydroelectric Power Project,” according to the FIR. “Though a decision was made in the 47th Board Meeting of CVPPPL to re-tender through e-tendering with reverse auction after cancellation of the ongoing tendering process, same was not implemented and the tender was finally awarded to M/s Patel Engineering,” the FIR said.

The project, expected to cost Rs 4,287 crore, has been tarnished by complaints of poor workmanship.