CBFC Passes The Kashmir Files With ‘A’ Certificate, Suggests 7 Cuts. Film To Release On March 11 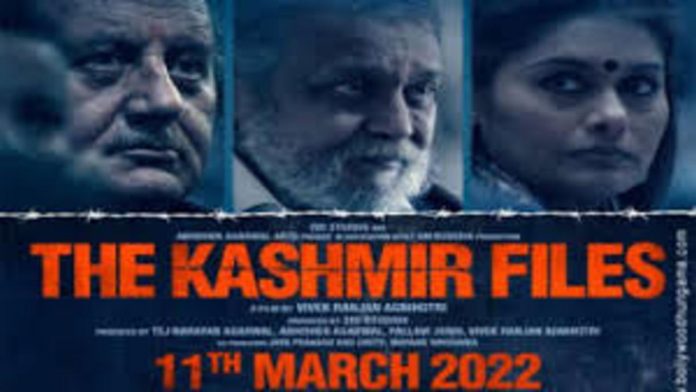 Vivek Agnihotri’s much awaited film The Kashmir Files is all set to releases in cinemas on March 11. Film’s theme and trailer have already received much attention and now expectations of earning are much high just like predecessor, The Tashkent Files, which was released in 2019.

The theme of the film is based upon the life of Kashmiri Pandits and their persecution. The Central Board of Film Certification (CBFC) has passed the film with adults-only certificate. However, there were 7 cuts.

A scene of the Indian national flag falling was eliminated. Additionally, the photograph of an ex-Prime Minister of India in a feared psychological militant’s home was cut. The logo of a TV station was eliminated while the word ‘rape’ was obscured as seen on a university floor and divider banner at three spots. The word ‘Disco CM’ was cut out and the words ‘Pandit’ and ‘Hindu’ were erased any place these terms were related with cuss words. Finally, the name of the university, displayed in the film, has been changed from JNU to ANU.

When asked, composer-director Vivek Agnihotri told that the board had earlier asked for a long list of cuts so, he fought for many scenes. He said, “For instance, (the examining committee) had issues with the word ‘Islamic terrorist’. More than two dozen cuts were issued in all. However, I argued and showed them the documents and proof to support my point. Eventually, they allowed the film without these cuts. How can they dispute the facts after all?”, he said that he had to persuade CBFC for about two months to keep scenes in the film.

While, on questions over the changing of university name from JNU to ANU, he said, “There were a lot of arguments done on this aspect. Then, I realized that changing the university’s name from JNU to ANU is not going to dilute the essence of the film. Also, I didn’t want to unnecessarily surround myself with court cases. Hence, I decided to make the change.”

The makers of The Kashmir Files were gave over the censor certificate on November 3, 2021. The final duration of the film is 170 minutes. The film is featuring Mithun Chakraborty, Puneet Issar, Pallavi Joshi, Anupam Kher and Darshan Kumaar.