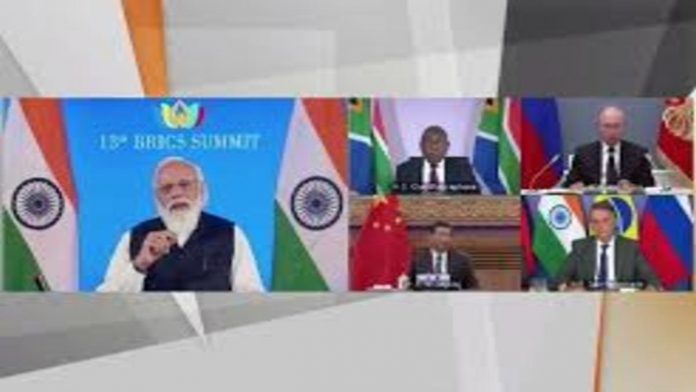 The five-nation BRICS summit, hosted by Prime Minister Narendra Modi on Thursday evening, advocated for a peaceful resolution to the Afghan issue. The leaders also requested a “inclusive intra-Afghan dialogue so as to ensure stability, civil peace, law and order,” according to the summit declaration. The summit’s theme is “cooperation for continuity, consolidation, and consensus,” but the focus is still on Afghanistan.

The summit’s “New Delhi Declaration” also emphasised the importance of “addressing the humanitarian situation and upholding human rights, including those of women, children, and minorities.”

The five-nation alliance (Brazil, Russia, India, China, and South Africa) also emphasised their “priority of fighting terrorism, including preventing attempts by terrorist organisations to use Afghan territory as terrorist sanctuary and to carry out attacks against other countries”.

They were “committed to combating terrorism… including cross-border movement of terrorists, terrorism financing networks, and safe havens,” according to the declaration.

During the summit, Russian President Vladimir Putin made a forceful statement on the subject, warning that an unstable Afghanistan may represent a threat to neighbouring countries.

Afghanistan should not become a “threat to its neighbours, a source of drug trafficking and terrorism,” according to the UN. “Its residents deserve to exercise their right to define what their state will look like on their own,” he said.

He also stated clearly who in his country was to blame for the situation.

“US and its allies’ withdrawal from Afghanistan has created a new crisis,” he said. “Global security has faced serious challenges and system of strategic stability has gone downhill. Outstanding regional conflicts haven’t stopped”.

This situation, he said, “stems from irresponsible attempts to impose alien values… To build a so-called democracy without taking into account historic features and traditions that other people have followed. It results in destabilisation and chaos and after that, the authors of this left and entire international community will have to clear up this mess”.