BJP Wins In 4 Out Of 5 States. AAP Sets To Rule Second State As Punjab 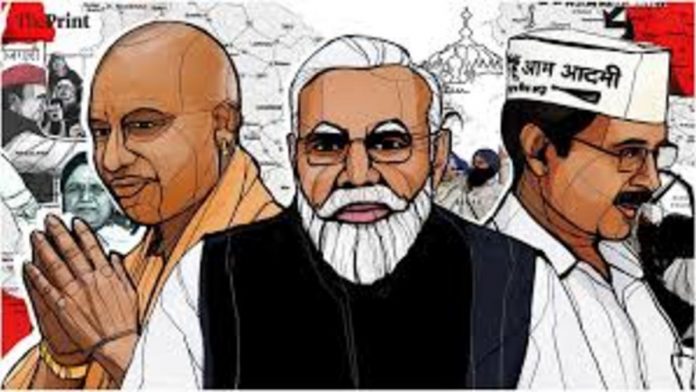 The saffron party has sweeped in four out of five states including Uttar Pradesh – the entry door to 2024 Loksabha elections. The Aam Aadmi Aadmi party led by Arvind Kejriwal has also begged for second state after Delhi. The BJP has won with majority mark in both UP and Uttarakhand while it has won 20 out of 40 seats in Goa.

While, AAP has begged 90 out of 117 assembly seats in Punjab. “The people Punjab have done something spectacular. This has been a huge revolution. So many huge leaders have lost… Amarinder Singh has lost, Sukhbir Badal lost, Parkash Singh Badal lost, Charanjit Channi lost, Navjot Sidhu lost, Bikram Singh Majithia lost… this is nothing short of a massive, massive revolution,” said Arvind Kejriwal.

As the majority mark in Uttar Pradesh’s 403 assembly seats is 202, but the BJP has attained a landslide majority with 270 seats. Leaving behind Samajwadi Party, Chief Minister Yogi Adityanath is set to hold office for his second consecutive term.

Congress which has been seeing downfall in every state has trailed in Uttarakhand as BJP took lead at 42 seats in comparison to Congress’ 25 seats till 1 pm on Thursday.

In Manipur the election trends have shown no majority mark. But there too BJP is likely to emerge as the largest party. While, BJP Chief Minister N Biren Singh has won about 18,000 votes on Heingang seat.