BJP Leaves No Stone Unturned In Bid To Retain Power In UP. Party Reaches Out To Purvanchal Residents 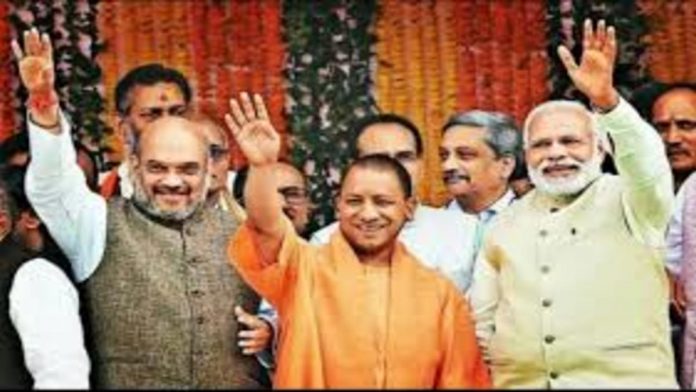 This election season, the BJP is leaving no stone unturned in its attempt to reclaim Uttar Pradesh. As the state’s assembly elections approach their final stages, the party’s Delhi section has begun reaching out to Purvanchal residents in the Capital, urging them to encourage their family members and relatives back home to vote for the party.

The Purvanchal region, which also includes sections of Bihar and Jharkhand, encompasses a large portion of eastern Uttar Pradesh.

Eastern UP will be heavily polled in the assembly elections’ fifth, sixth, and seventh phases, which will be held on February 27, March 3, and March 7, respectively.

The Purvanchal area plays a key role in state elections, with 164 assembly seats (out of a total of 403 in UP) split across 28 districts.

In the 2017 state elections, the BJP won 115 of the 164 seats in Purvanchal, trailed by the Samajwadi Party (SP) with 17, the BSP with 15, the Congress with 2, and others with 15. The party is now aiming to match, if not outperform, its previous performance.

Purvanchalis are thought to account for roughly 40% of the population in the Capital. According to a BJP leader, the party estimates that 20 lakh to 25 lakh people from Uttar Pradesh live in the city.

At a meeting earlier this week in Delhi, the BJP’s Delhi unit decided to call people from eastern Uttar Pradesh.

In an interview with a news outlet, Delhi BJP Purvanchal Morcha president Kaushal Mishra revealed that the party has initiated a drive to mobilise as many people as possible from eastern UP to vote for the party. Many of these migrants, according to Mishra, have already returned to vote in the fifth phase.

Vote for progress
The Purvanchal Morcha, according to Mishra, has been instructed to meet with people from eastern UP and convey the “tremendous development work that is taking place in the region under the BJP’s double-engine government.”

Party workers have been instructed to persuade and motivate individuals who are registered to vote in UP to return to their hometowns and vote for the BJP.

“Many people work in Delhi, yet their votes are still cast in their home towns.” Our workers are urging people to return to their hometowns and vote for the BJP if at all possible. We are suggesting that if they are unable to attend, they ask their friends, family members, and relatives to vote for our party,” Mishra added.

Purvanchal morcha members, in groups of two or three, have begun meeting migrants from eastern UP with a list of significant development works and welfare measures of the Modi administration at the Centre and the Yogi Adityanath government in UP, according to the party’s plan.

“The BJP government has ensured that the Purvanchal Expressway is completed, giving the region a new dimension of development and wealth. The reconstruction of Kashi Vishwanath Dham, therefore, has revived the region’s cultural and spiritual identity and pride,” Mishra remarked.

“The BJP government has also provided free meals to the poor and needy, as well as free Covid immunisation.” We are informing people about our government’s work in Purvanchal in order to gain their support,” Mishra remarked.

Arun Singh, the BJP’s national general secretary and a Rajya Sabha member, attended a Purvanchal Morcha gathering on Tuesday evening. “The BJP will form the government once more under Yogi Adityanath’s leadership by winning more than 300 seats,” Singh had stated.

watch tokyo hot jav free TIKP-075 Yua, a saffle with big breasts, is too cute and healing. PRED-441 "I already got it!" A slender female announcer is surprised at half-crying acme! - Pursuit Peeing Piston Emi Nishino FC2-PPV-3127193 ``#62'' real gravure. - The soft F-cup beautiful breasts and S-class cute face were too attractive. - Feeling your sister's overflowing sex appeal and having sex in the tension and excitement MAX is too pleasant! - ! - ♡ unrequited love ♡ DORI-072 Paco Shooting No.72 FC2-PPV-3125145 *Until 11/13 1930pt → 930pt [Complete appearance] I received a message from a former workplace junior of a married beautiful mature woman, so I really called and let her hug me.