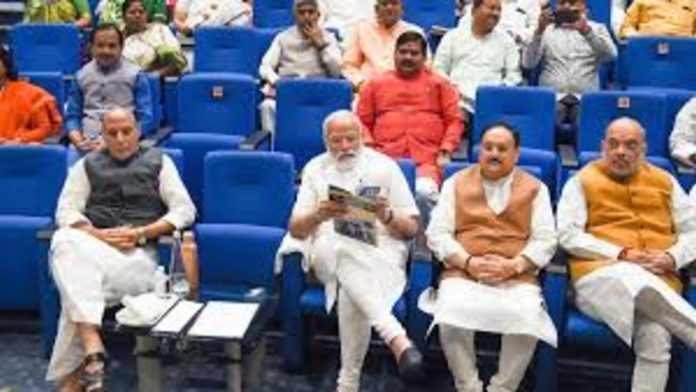 After winning one seat each in Assam, Tripura, and Nagaland in Thursday’s elections, the BJP has now accomplished the milestone of having 100 members in the Rajya Sabha for the first time in its history.

The BJP lost its lone Rajya Sabha seat in Punjab, but gained one each from the three northeastern states and Himachal Pradesh, where all five departing members were from opposition parties, in the recently held biennial elections for 13 Rajya Sabha seats across six states.

The Aam Aadmi Party won all five seats in Punjab.

While the new tally has yet to be announced on the Rajya Sabha website, the BJP’s total would be 100 if the three seats it won in the most recent round of elections are added to the existing 97.

Despite falling far short of a majority in the 245-member House, the BJP’s score reflects the party’s steady rise since Prime Minister Narendra Modi led it to a majority in the Lok Sabha in 2014. The BJP’s Rajya Sabha strength was 55 in 2014, and it has slowly increased since then as the party has won power in a number of states.

The last time a party had 100 or more seats in the Upper House was in 1990, when the then-ruling Congress had 108 members before steadily declining after its numbers fell to 99 in the 1990 biennial polls and continued to decline as a stream of states fell out of its rule, ushering in the coalition era, which lasted until 2014.

The saffron party’s grip on the record may be shaky, as polls for about 52 more seats are due to be held shortly, and it is projected to lose seats in states including as Andhra Pradesh, Chhattisgarh, Maharashtra, Rajasthan, and Jharkhand.

It remains to be seen whether the BJP’s predicted gains in Uttar Pradesh, where it is expected to win at least eight of the 11 expected vacancies, can compensate for the loss. Five of Uttar Pradesh’s 11 retiring Rajya Sabha MPs are from the BJP.