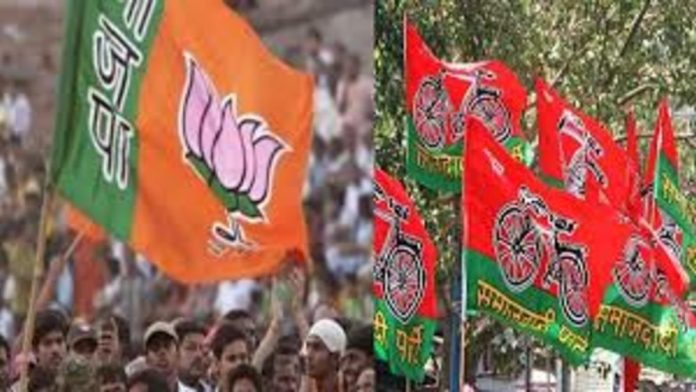 With Muslim candidates securing a major percentage of seats in the Samajwadi Party-Rashtriya Lok Dal alliance, the BJP is appealing to Jat voters in western Uttar Pradesh, claiming that the SP has defrauded their community.

SP candidates running under the RLD banner have given the BJP ammo to use against the alliance, which could jeopardise the BJP’s chances in the state’s crucial western area. Through the RLD, the coalition has cornered Jat votes, while the SP is already projected to gain Muslim votes.

The BJP is not shying away from reminding voters of Jat and Muslim fault lines in the region and condemning the SP’s “appeasement politics” as it manoeuvres through the region’s divided Jat supporters.

“Akhilesh distributed tickets for the RLD symbol contest to his men. As a result, if they win, legislators will support Yadav. He has deceived the Jats of western Uttar Pradesh, and they will never forgive Akhilesh Yadav,” Som, the BJP candidate for Sardhana assembly, remarked.

Sanjeev Balyan, a union minister, joined the clamour, claiming that Akhilesh had not forgotten anyone. “The RLD’s symbol is used, and the Samajwadi Party’s candidates are used. They’ve employed RLD, which has enraged the party’s fans. “Anyone who wants to come is welcome,” Balyan stated.

Jayant spared, Akhilesh target
The BJP is avoiding targeting RLD president Jayant Chaudhary in a calculated approach. The SP of Akhilesh Yadav is being held responsible for defrauding the RLD.

In western Uttar Pradesh, there are 7% Jats (out of 31% OBCs) and 29% Muslims. The BJP’s chances of winning in the region could be harmed if Jat and Muslim votes are consolidated. The SP is attempting to corner Jat votes through the RLD by using the recent farmers’ agitation, despite the fact that the Narendra Modi-led central government repealed it.

Suresh Rana, a cabinet minister in Yogi Adityanath’s government, mirrored the stance of his party while campaigning in Jat-dominated villages. “I’m not sure why the RLD requires this alliance. Even RLD voters are dissatisfied. “Voters should accept the alliance without resentment,” Rana stated.

Satyapal Singh, a Jat leader and MP from Baghpat, believes the SP misled the RLD as well. The RLD, according to the MP, has “very little voice” in the coalition. “RLD ki wahaan chali nahi (RLD had no say), SP ne apna candidate diya (the SP dominated the debate over candidate selection),” he remarked.

Videos deepen Jat-Muslim fault line
The BJP has made sure that footage of the SP’s Muslim candidates scaring Jat communities to vote for them are widely distributed. Whether it’s the footage of supporters of SP-RLD candidate Nahid Hasan from Kairana or SP-RLD candidate Adil Chaudhary from Meerut (South) assembly, it’s all the same.

Balyan responded to the videos on Twitter, urging Jats to vote and be united. “Jaton ne vote nahin diya toh 1 minute mein ilaaj kar denge (If Jats don’t vote for us, we’ll tell them what we can do in one minute), Nahid hasan ke samarthak (supporters of Nahid Hassan)…” he tweeted, specifically targeting the SP. In Western Uttar Pradesh, the SP is separating the Jats. However, I am confident that the Jats would stand united in support of growth and progress.”