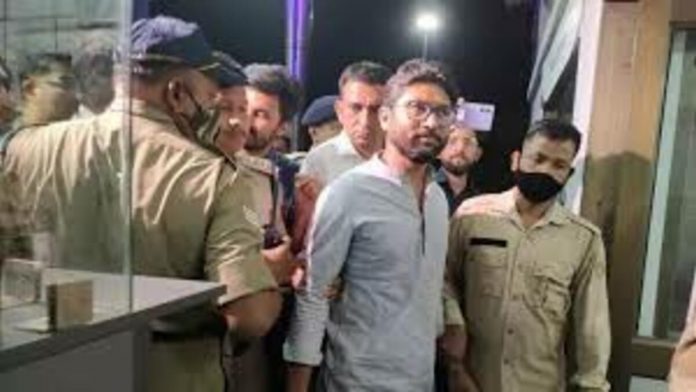 Assam Police detained Gujarat MLA Jignesh Mevani late Friday night, apparently in response to a BJP leader’s protest about now-deleted comments about Prime Minister Narendra Modi.
Mr Mevani was apprehended at a Palanpur Circuit House around 11.30 p.m. on Wednesday and transported to Ahmedabad, from where he was flown to Assam this morning.

A complaint was lodged against him by Arup Kumar Dey, a BJP politician from Kokrajhar, Assam.

Criminal conspiracy, fostering hostility between communities, intentional insult with purpose to incite breach of peace, and sections of the Information Technology Act are among the allegations listed in the First Information Report, or FIR.

Mr Mevani’s Twitter account says that two of his posts from April 18 were suppressed due to a “legal demand.”

“According to a document supplied by Assam police officials, a FIR has been filed in connection with a tweet sent by Mevani a few days ago. Twitter, on the other hand, has delayed the tweet. It has something to do with Nathuram Godse. Mevani was initially transported by vehicle to Ahmedabad, and then by plane to Assam early this morning “Suresh Jat, Mr Mevani’s aide, was cited by a news agency as saying.

After learning of his detention, Gujarat Congress president Jagdish Thakor and other Congress officials rushed to Ahmedabad airport and chanted anti-BJP chants. They said that the police refused to show a FIR or explain why Mr Mevani was detained.

Mr. Mevani was elected as an independent MLA in Vadgam, Gujarat. Last year, he expressed support for the Congress and said that he will run as a candidate for the party in the state election later this year.