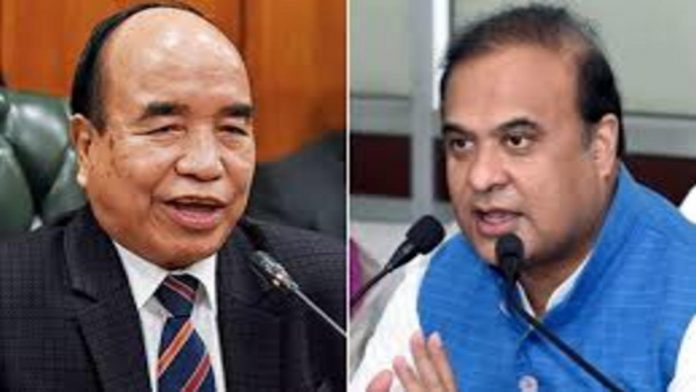 On Friday (November 26), Assam and Mizoram agreed to maintain peace and calm along their shared inter-state border and to form committees to resolve boundary disputes that claimed the lives of five Assam Police officers and a civilian in July.

The decisions were made in the presence of Union Home Minister Amit Shah at a meeting between Assam Chief Minister Himanta Biswa Sarma and his Mizoram colleague Zoramthanga.

This was the second meeting between the chief ministers in as many days. They had also met for dinner on Thursday night (November 25).

“It has been determined that both states would form committees to resolve border concerns through negotiations.” Chief Ministers’ level talks would also take place from time to time in this regard. Sarma wrote, “We’re grateful to Union HM for his kind counsel and support (sic).”

On Thursday (November 25), Zoramthanga stated that both state administrations “would strive” to increase fencing along the border.

Officials said the two chief ministers met in the national capital as a result of an intervention by the Union Home Ministry, which has been seeking to address the border problems.

According to an official, the Union government seeks a peaceful resolution to the border conflict between Assam and Mizoram, and the Union home minister is in constant contact with both chief ministers.

Following the incident on July 26, both the Assam and Mizoram police departments filed separate cases, naming each other’s political leaders, police officers, and civil officials. However, following a cease-fire, some of these cases were dropped.

On July 28, the chief secretaries and DGPs of the two states met under the chairmanship of Union Home Secretary Ajay Bhalla to discuss the deployment of a neutral central force (CRPF) at the incident site.

When the Mizoram Police opened fire on a team of Assam authorities on July 26 following conflicts near the two states’ border, five Assam Police personnel and a civilian were killed, and over 50 others, including a superintendent of police, were injured.

While the Mizoram government claimed ownership of a 509-square-mile stretch of inner-line reserve forest established in 1875 under the Bengal Eastern Frontier Regulation of 1873, the Assam government insisted on the constitutional map and boundaries created by the Survey of India in 1933.

After a major spat in 2018, the border dispute flared up again in August of last year and again in February of this year. However, after a series of talks and the intervention of the Centre, the rising tensions were effectively defused.

Nearly a month after this incident, a new border conflict erupted, with both sides accusing the other of encroaching on their borders.

Mizoram accused Assam of encroaching on its territory and taking the Aitlang region, located 5 kilometres west of Vairengte hamlet, by force. Assam, on the other hand, accused Mizoram of erecting structures and growing betel nut and banana plants within the Hailakandi district.

Officials stated the razing of two camps created by Mizos, as well as a COVID-19 testing centre, was part of an effort to thwart Mizoram’s attempt to seize property on the border.