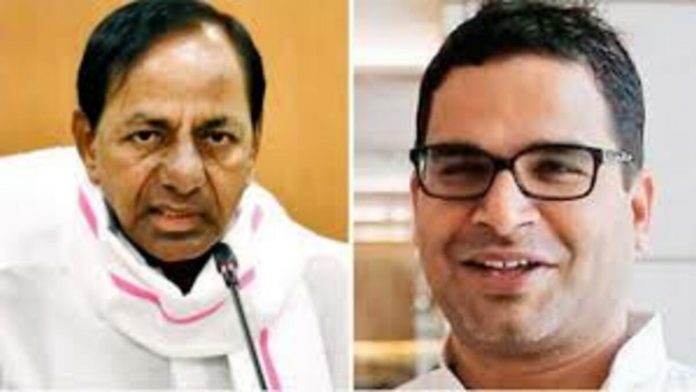 Before the state’s assembly elections next year, Telangana Chief Minister K Chandrashekar Rao’s party has inked a contract with political consultant I-PAC, which was earlier run by electoral strategist Prashant Kishor. Mr Kishor, who is rumoured to be on the edge of joining the Congress party, has been camped out in Mr Rao’s official mansion in Hyderabad since Saturday, according to sources.

Mr. Rao’s deal has been anticipated for some time. However, it has sparked conjecture in light of Mr Kishor’s recent negotiations with the Congress, in which he proposed a comprehensive strategy to revitalise the Grand Old Party.

So far, he’s given extensive presentations on his plans at three meetings. He has also reportedly given Congress till May 2 to make a decision. Sonia Gandhi is expected to make a final decision on the topic at a major meeting tomorrow, after consulting with a team of experts and Rahul Gandhi.

Mr Kishor’s advisory position to parties in direct confrontation with the Congress in the states, including Mamata Banerjee’s Trinamool Congress and Jagan Mohan Reddy’s YSR Congress, has made some Congress veterans wary of any engagement with him.

According to sources, Mrs Gandhi’s special team evaluating Mr Kishor’s proposal wants him to disassociate himself from all other political parties and devote himself totally to the Congress.

While Mr. Kishor’s relationship with IPAC has officially ended, he is reported to be aware of all of the organization’s decisions, which he has led for a number of years.

According to sources, Mr. Kishor urged that the party run for 370 seats in the 2024 elections in his presentations to the Congress. After decades of antagonism, he has also urged that the party establish alliances with regional leaders such as Mamata Banerjee and KCR — a proposal that is unlikely to delight state Congress units.

Following Mr Kishor’s meetings with the Congress, there has been conjecture over whether Mr Rao will discontinue his relationship with him or keep his distance from his team.

Mr Rao previously referred to Mr Kishor as his “best friend” and admitting to meeting with the political strategist “to bring about a national transformation.”

“For the past 7-8 years, Prashant Kishor has been my best buddy. He’s never worked for a living. He is not a salaried employee. I’m sorry you don’t see his dedication to the country “He had said this in response to rumours of a $300 million deal.

“I’m in negotiations with Prashant Kishor about bringing about a national transformation. Prashant Kishor and I are collaborating on this. Who could possibly object to this? What makes them think he’s a bomb? Why are they so upset?” Speaking at a news conference in Hyderabad, Mr Rao added.