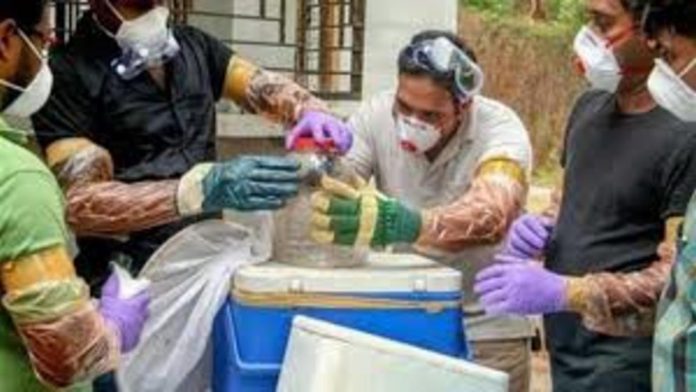 Following the death of a 12-year-old child in Kozhikode on September 5, local officials have stepped up efforts to prevent the deadly virus from spreading further in the district and adjacent areas. The presence of Nipah virus was confirmed by the Pune National Institute of Virology.

Two more persons with indications of Nipah virus infection have been detected, according to Kerala Health Minister Veena George.

She stated the two are among the deceased child’s 20 high-risk contacts, and that all of the high-risk contacts will be transferred to the Kozhikode Medical College by evening, while the child’s other connections have been ordered to remain in isolation.

According to her, the Medical College Hospital’s paid ward has been totally turned into a dedicated Nipah ward. The minister also urged residents in the neighbouring districts of Kannur and Malappuram to exercise caution.

What exactly is the Nipah virus?
Nipah virus (NiV) is a zoonotic virus that is transferred to humans through animals and can potentially be spread through contaminated food or directly from person to person, according to the World Health Organization (WHO).

Nipah virus causes a variety of symptoms in infected people, ranging from asymptomatic (subclinical) infection to acute respiratory sickness and deadly encephalitis. In animals like pigs, the virus can cause serious sickness.

What is the method of transmission of the Nipah virus?
According to US CDC, Nipah virus (NiV) can spread to people from:
 Direct contact with infected animals, such as bats or pigs, or their body fluids (such as blood, urine, or saliva).
 Consuming food products that have been contaminated by body fluids of infected animals (such as palm sap or fruit contaminated by an infected bat).
 Close contact with a person infected with NiV or their body fluids (including nasal or respiratory droplets, urine, or blood).

Symptoms of Nipah virus infection
Asymptomatic illnesses to acute respiratory infections, convulsions, and deadly encephalitis are all possible in humans.

Infected persons have fever, headaches, myalgia, vomiting, and sore throat at first, according to the WHO.

Atypical pneumonia and severe respiratory difficulties, including acute respiratory distress, have been seen in some patients. In extreme cases, encephalitis and seizures develop, progressing to coma within 24 to 48 hours.

The case fatality rate for Nipah virus infection is believed to be 40–75 percent, but this can vary depending on the epidemic and the surveillance and clinical management in affected areas.

Treatment for Nipah virus
There are no medications or vaccinations available that particularly target Nipah virus infection at this time.

Nipah, on the other hand, has been designated as a priority disease for the WHO Research and Development Blueprint.

To limit the danger of human infection, diseased animals may need to be culled and their carcasses buried or incinerated under strict supervision.

The disease can be contained by restricting or prohibiting the transportation of animals from contaminated farms to other locations.