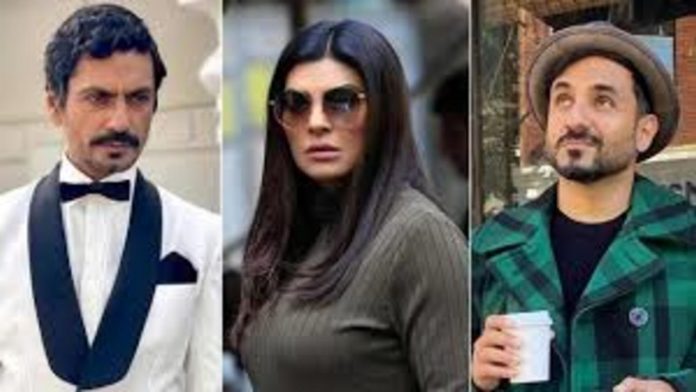 India was represented at the 2021 International Emmy Awards on Tuesday in New York by actors Nawazuddin Siddiqui and Vir Das, as well as the Sushmita Sen-starrer series Aarya. The International Emmys, which have been held for over 48 years and are organised by the International Academy of Television Arts & Sciences, aim to “recognise excellence in television produced outside of the United States.” “.. In September, the nominations for the year 2021 were released.

However, when the results were announced, none of the three Indians nominated for awards were able to take home the prize in their respective categories. For his Netflix film Serious Men, Nawazuddin received a nomination for best performance by an actor. He will compete against British actor David Tennant (Des), as well as Israeli actor Roy Nik (Normali) and Colombian actor Christian Tappan (El Robo del Siglo or The Great Heist). In this category, Tennant received the International Emmy.

Serious Men, directed by Sudhir Mishra, is based on novelist Manu Joseph’s 2010 novel of the same name. It tells the narrative of an aspirational underachiever who uses his son’s unexpected reputation as a boy genius to better his family’s financial situation.

Through its protagonist Ayyan Mani (Nawazuddin), a Tamil Dalit who continues to challenge the system that has oppressed people for decades, the film makes a powerful statement on caste discrimination and upper-class privilege. In the best drama series category, Sushmita Sen’s Aarya, a Disney+ Hotstar series helmed by Ram Madhvani, was nominated with Chile’s El Presidente, Israel’s Tehran, and the second season of There She Goes from the UK. In this category, Tehran came out on top.

Aarya is a remake of the well-known Dutch crime drama Penoza. The Indian adaption starred Sushmita Sen as Aarya Sareen, a happily married woman whose life is turned upside down when her husband, pharma baron Tej Sareen (Chandrachur Singh), is shot. Aarya was created by Ram Madhvani and Sandeep Modi and premiered in June of last year to critical acclaim. The show’s second season is slated to premiere soon.

Vir Das: For India, a Netflix comedy special, was nominated in the comedy category with Call My Agent Season 4, Motherland: Christmas Special (The UK), and Promesas de Campana (Colombia). This category was won by Call My Agent. Vir has lately made headlines with his six-minute comedy film ‘I come from two Indias’, which he premiered at the John F Kennedy Center in Washington, DC.

After losing to Call My Agent, Vir posted a message on Twitter.

In the film, he discussed current events such as the fight against COVID-19, rape episodes, farmer protests, comedian crackdowns, and gasoline costs. Many celebrities, politicians, and social media users have complimented the monologue, but it has also resulted in police complaints and criticism of the comic. Das later published a statement claiming that his remarks were not meant to be insulting to India and that he simply wanted to emphasise that, despite its problems, India was a magnificent country.

On Tuesday, the winners of the 2021 International Emmy Awards will be announced in person. The ceremony will be broadcast live in India on November 23 at 5.30 a.m. IST. Last year, director Richie Mehta’s Delhi Crime, starring Shefali Shah, won the prize for best drama series, and fans of these films and shows are expecting that India will do well this year as well.

The International Academy is “dedicated to complying to CDC and WHO rules to guarantee we are abiding by all Covid Safety protocols at the time of the event,” according to their official website “..

uncensored leaked jav IENF-241 A Girl Who Sympathized With Me Who Wasn't Sae When I Had Her Sister Give Me Intercrural Sex With The Promise Of "Just Rubbing It", It Was Too Pleasant For Each Other And Her Pussy Was Dripping! - Nurutsu and raw insertion! - "Huh? Is it in?" - 13 GVH-479 According To Rumors, The Busty J-kei In The Next Class Is Repeating A Year And Seems To Let Me Fuck You After School Sakura Mita Pacopacomama-111222_737 Yukata Lady Having Orgasms Over and Over BBTU-047 Closed Room Big Boob Training Class Alice Kisaki PPVR-039 [Vr] A Kimeseku VR That Gives A Z-Generation Junior Who Is Reverse Power Harassment An Aphrodisiac Coffee And Makes Him Obedient! - ! - Karen Yuzuriha