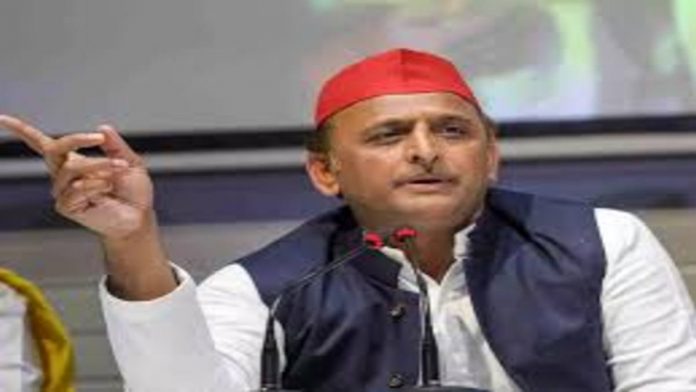 Akhilesh Yadav, the president of the Samajwadi Party, has raised concerns over the security of the Electronic Voting Machines ahead of the announcement of the Uttar Pradesh Assembly election results on March 10.

Akhilesh Yadav accused Election Commission staff of tampering with EVMs during a press conference on Tuesday, saying he no longer believes the election authority.

The SP chief further claimed that the Varanasi District Magistrate (DM) was transferring EVMs without providing local candidates with any information, and he requested the EC to investigate.

“If EVMs are being carried this way, we need to be on the lookout.” This is a form of thievery. We must keep our votes. We may take legal action against it, but first, I’d like to appeal to the public to help defend democracy.

Akhilesh Yadav took to Twitter to say that the news of the EVMs being discovered in Varanasi is sending a warning to every assembly in Uttar Pradesh to be on the lookout.

“All candidates and supporters of the SP-alliance should be prepared with their cameras to resist any effort at vote manipulation.” “Become soldiers in counting votes to preserve youth democracy and future,” Akhilesh Yadav wrote in Hindi.

Meanwhile, after numerous exit polls predicted a BJP and its allies victory in the UP election, the SP president claimed that the exit polls are merely trying to create the impression that the BJP is winning.

” The BJP is afraid because the Samajwadi Party is gaining Ayodhya. Exit polls are designed to give the impression that the BJP is winning. Akhilesh Yadav remarked, “This is the last fight for democracy.”

He further asserted that the SP-led alliance would win over 300 votes in UP to establish the next government.

The Rashtriya Janata Dal (RJD) in Bihar has come out in support of Akhilesh Yadav and has criticised the EC using unparliamentary language, referring to EC personnel as “traitors.”

Through its official Twitter handle, the RJD, an ally of the SP in UP, slammed the poll board, claiming that the top body in charge of conducting elections in the country was celebrating its own death.

“The election commission of the country is commemorating its own demise.” What is the purpose of such a commission for the living dead? With such useless, negator, and namak haram officials, the country and Karma do a lot of harm,” RJD wrote in Hindi.