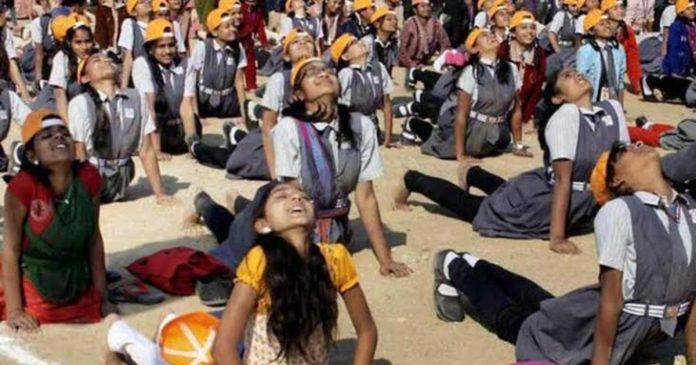 The All India Muslim Personal Law Board (AIMPLB) expressed grave opposition to the Centre’s directive to hold a ‘Surya Namaskar’ event in schools across the country to mark the 75th anniversary of India’s independence, saying that it was a form of worshipping the Sun, whereas Islam only allows worshipping the Almighty. Instead, the board suggested that kids be asked to sing the national anthem to commemorate the event.

The board’s general secretary, Maulana Khalid Saifullah Rahmani, said in an official statement that Muslim students at government schools should not be forced to participate in the event and asked Muslims not to engage in the ‘Surya Namaskar’ practise. The Sun is worshipped in the form of ‘Surya Namaskar.’ Islam and other Indian minority do not believe in the Sun as a divinity and oppose its worship. As a result, the government must revoke such directives, according to the AIMPLB statement.

“India is a secular, multi-religious and multi-cultural country. Our constitution has been drafted on the basis of these principles. The Constitution does not allow anyone to impart teachings of a particular religion in government educational institutions or to organise events based on the beliefs of a particular group,” the statement read.

The current government is violating secularism’s ideals by attempting to impose the majority community’s philosophy and traditions on all parts of the country, according to the statement. Instead of holding events like Surya Namaskar as part of the Independence Day celebrations, the board suggested that pupils be forced to repeat the national anthem to boost their patriotism.

The Centre has ordered that this Surya Namaskar drill be organised by all district education officers. The statement read, “This is unconstitutional and false patriotism propaganda.” The board then urged the government to “concentrate on actual issues such as rising prices, unemployment, and the depreciation of the Indian rupee.”

The statement finished by advising Muslim students that they are not permitted to participate in events such as Surya Namaskar and should refrain from doing so.