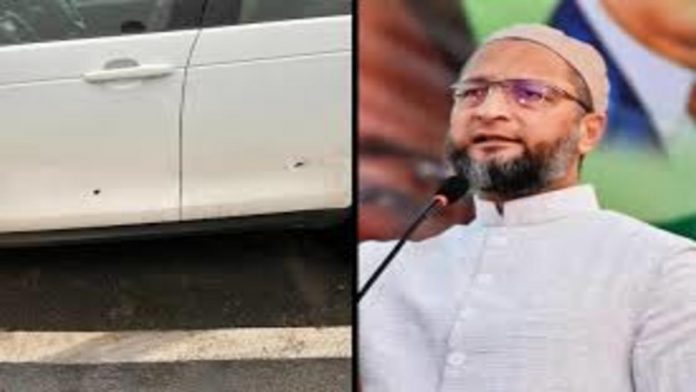 On his return to Delhi, AIMIM Chief Asaduddin Owaisi was fired upon by bullets on Thursday. He was returning after campaigning in Uttar Pradesh for party candidates for upcoming assembly polls in the state. However, no one was injured during the incident that happened around 6 pm.

“Three to four rounds of bullets were fired upon my vehicle near Chhajarsi toll plaza when I was returning from an election-related event in Kithaur, Meerut. The incident was a well-planned conspiracy, but I escaped without injuries,” Owaisi said in a tweet. “We are all safe. Alhamdu’llah,” he further said.

The Chhajarsi toll plaza is about 55 km from Gaziabad and is on the Hapur-Ghaziabad stretch of National Highway 24.

So far, the police has arrested one person named Sachin, a resident of Noida after the incident, said an ASP of Hapur. “A 9 mm pistol was recovered from him and he was taken into police custody. An investigation is underway,” he further said.

“We heard a huge bang. One was firing from a 90-degree angle and another was right opposite my door. Behind my car were my party members accompanying me in another car. They hit one of the shooters,” said Mr Owaisi.

He said that he left from another vehicle to Delhi as the tyres of his vehicle were punctured.

Owaisi requested the Election Commission of India to order an independent inquiry into the incident.  said Owaisi, who is also the Hyderabad MP, after tweeting the video clippings from the toll plaza.

Later, Mr Owaisi also demanded Election Commission to order an inquiry in to the matter. “It is the responsibility of the UP government and the Modi government to conduct an inquiry. I will also meet Lok Sabha Speaker Om Birla on this matter,” he said.

Soon after the news broke out, there was a mild tension at the head office of AIMIM in Hyderabad at Darusalam. However, MIM senior leader and MLA Mumtaz Ahmed Khan said, “We will not be cowed down by such attacks on our leader.” He further said, that these type of attacks were not new to the party.
Soon after the incident, additional police forces were deployed at all the cross-roads in sensitive Vijaynagar Colony, Mallapally, Nampally, Darusalam etc.

Party activists also hurried to get more information on the matter after hearing the firing at Owaisi’s vehicle.

Later in the night, the AIMIM floor leader Akbaruddin Owaisi and Malakpet MLA Ahmed Balala went to Delhi to know more on the situation.