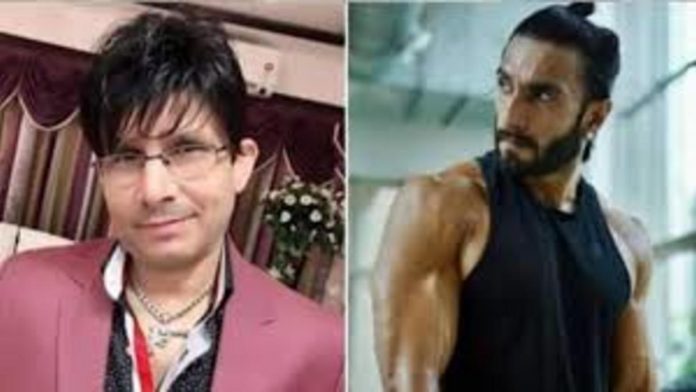 Kamaal R Khan, a self-proclaimed critic, has made some stunning accusations about Ranveer Singh’s Bollywood debut. Ranveer Singh was first introduced to the public by Aditya Chopra’s Yash Raj Productions in the film Band Baaja Baaraat. He featured alongside Anushka Sharma in the film, which was well welcomed by both spectators and reviewers. For Ranveer, there was no turning back after Band Baaja Baaraat.

Now, in his recent video, ‘Bunty Aur Babli 2 review,’ KRK claims that it wasn’t Aditya Chopra who introduced him, but that YRF was simply Ranveer’s way into Bollywood. Ranveer’s father reportedly paid YRF Rs 20 crore to get his son started in the profession, according to him.

Following the release of the teaser for his next flick ’83, Ranveer Singh grabbed headlines. Ranveer shared the teaser on Instagram, writing, “The Greatest Story Ever Told The highest honour. 83 is a Hindi, Tamil, Telugu, Kannada, and Malayalam film that will be released in cinemas on December 24, 2021. The teaser is now available. The trailer for #ThisIs83 will be released on November 30th.”

Due to the coronavirus epidemic, ’83 was originally scheduled to be released in April of this year, but was pushed early. Deepika Padukone, Harrdy Sandhu, Jatin Sharma, Saqib Saleem, Tahir Raj Bhasin, Jiva, Ammy Vrik, and Pankaj Tripathi are among the cast members.

Ranveer has a number of exciting projects in the works. Jayeshbhai Jordaar and Cirkus will feature the actor. He’s also filming Rocky Aur Rani Ki Prem Kahani, directed by Karan Johar. He’ll be seen alongside Alia Bhatt in the film. The two previously collaborated on Zoya Akhtar’s Gully Boy.