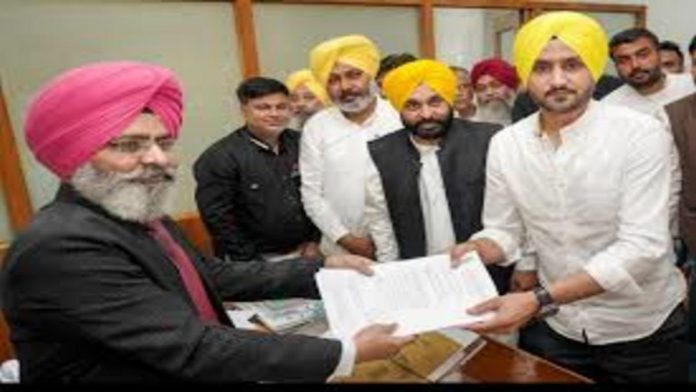 On April 9, five Rajya Sabha seats will become vacant, and names must be submitted today for elections on March 31.

Harbhajan Singh, 41, submitted his AAP candidacy and was photographed wearing a yellow turban inspired by Punjab Chief Minister Bhagwant Mann, who was sitting next to him.

“After making India proud as a bowling icon, Mr. Turbanator will now raise his voice in Parliament for the people of Punjab,” AAP tweeted, along with a video.

Before the elections, Harbhajan Singh met with former Punjab Congress head Navjot Singh Sidhu, fueling suspicion that he may run for Congress. However, the former cricketer has refuted the allegations.

The AAP won 92 of the 117 assembly seats in Punjab. The AAP’s upper house strength is expected to expand from three to eight after the Rajya Sabha election.

The Congress, as well as Mr. Sidhu and numerous other high-profile party candidates, lost the Punjab election.

Sandeep Pathak, a physics professor at India’s prestigious IIT (Indian Institute of Technology), is credited with helping the AAP emerge and win in Punjab. He is said to be close to AAP president Arvind Kejriwal and Punjab’s new AAP government’s new Chief Minister Bhagwant Mann, who assumed office last week.

According to sources, Professor Pathak remained in Punjab for three years to prepare for the election and created AAP’s booth-level organisation.

Raghav Chadha, a senior AAP politician and MLA in the Delhi assembly, is one of the party’s top leaders.

“My leader, Arvind Kejriwal, and my older brother, Bhagwant Mann, have showed great faith in me and have entrusted me with a significant amount of responsibility at such a young age. I hope I can live up to their expectations “After submitting his paperwork, Mr Chadha informed reporters.

Lovely Professional University’s founder, Ashok Kumar Mittal, is a prominent academician and social crusader, according to the party.

Raghav Chadha, a senior AAP politician and MLA in the Delhi assembly, is one of the party’s top leaders. He will also be the youngest member of the Rajya Sabha at 33 years old.

“My leader, Arvind Kejriwal, and my older brother, Bhagwant Mann, have showed such faith in me and have entrusted me with a great deal of responsibility at such a young age.” Mr Chadha told reporters after submitting his paperwork, “I think I will be able to exceed their expectations.”

Lovely Professional University’s founder, Ashok Kumar Mittal, is a prominent academician and social activist, according to the party.

Sanjeev Arora is a businessman from Ludhiana who is well-known for his cancer charity.