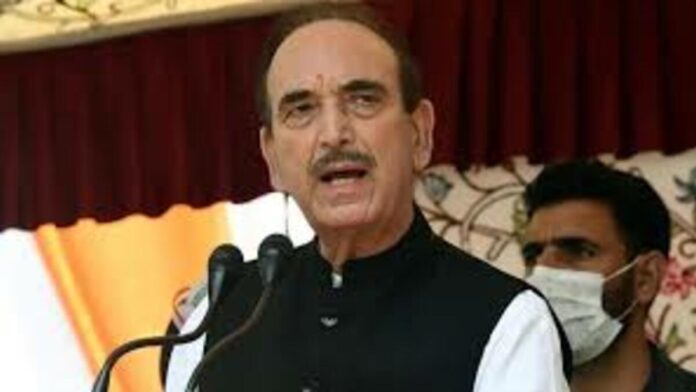 In their solidarity with Ghulam Nabi Azad around 64 senior Congress leaders including former Deputy Chief Minister Tara Chand on Tuesday resigned from party in Jammu. The leaders supported the now former leader of Congress for his vision for a bright future of the Union Territory.

The 64 leaders submitted their resignation in a joint letter to the Congress Chief Sonia Gandhi.
Former CM Tara Chand along with Manohar Lal Sharma, Gharu Ram, Abdul Majid Wani, Manohar Lal Sharma and former MLA Balwan Singh made announcement of their exit from party at a press conference.

Citing a sharp attack on Rahul Gandhi for his “childish behavior” and lack of “rebuilding power”, the 73 year old former Chief Minister of Jammu and Kashmir ended terms with the party after 50 years of association.

“All of us had a very long association with the party spanning over decades and devoted all our energy and resources towards expanding the party in Jammu and Kashmir but unfortunately we found that the treatment meted out to us was humiliating,” Mr Singh read, from the joint letter sent to Sonia Gandhi.

“With our leader and mentor Ghulam Nabi Azad having resigned from the party on the issue listed by him in a letter to you [Sonia], we believe that we should also come out of Congress to make some worthwhile contribution in building a positive political society where people are heard and responded too,” the letter read further.

As part of his clear vision, Mr Azad will soon launch his national-level party from Jammu and Kashmir.

“We all support Azad and we will join him in his journey to lead J&K to a bright future,” said all the signatories of the joint resignation letter.

Mr Singh asserting a situation of ongoing unpredicted situation in the Union Territory owing to absence of ruling government said, the decision of launching a new national level party from Jammu will set new goals with high hopes to set things right.

“We are confident that J&K will be able to get statehood back after a gap of three years under the leadership of Azad. He is the sole and most powerful voice for statehood of J&K and early elections,” he further said.

He also said, “we are sure that his [Azad’s] vision will help J&K and its depressed masses to come out of the dark shadows of pessimism and shape a new and bright future for J&K”.

In last four days, other prominent leaders from the party including former legislators and ministers and members from municipal, Panchayati Raj Institution (PRI) and also leaders from district and blocks have already resigned in support of Mr Azad.