6 Dead, 12 Injured After An Elections Bus Lost Control And Ran Over Spectators in Kanpur 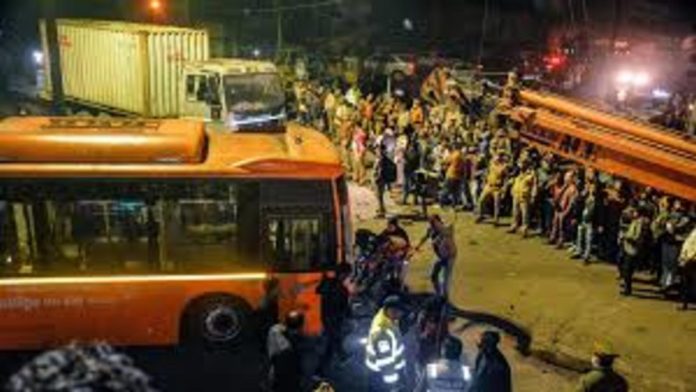 According to authorities, an electric bus lost control and ran over spectators in Kanpur today, killing at least six people and injuring 12 more. The event happened near the Tat Mill intersection.

The fast bus lost control and collided with multiple cars and pedestrians. In the crash, the bus totaled three automobiles and a large number of bicycles.

The bus then sped through a red light before coming to a halt after colliding with a truck.

A police investigation has been launched into the situation.

According to Pramod Kumar, Deputy Commissioner of Police, East Kanpur, the bus driver has been detained.

The injured have been sent to a local hospital for treatment.

The relatives of those slain in the accident received condolences from President Ram Nath Kovind.

“The news of several deaths in the Kanpur bus disaster breaks my heart. My heartfelt condolences go out to the families who have lost loved ones in this tragedy. I wish those who have been hurt a swift recovery” President Kovind made the announcement on his official Twitter account.

“It’s heartbreaking to learn of the traffic disaster in Kanpur’s Babupurwa neighbourhood. My heartfelt condolences go out to the families of those who have died as a result of this. In addition, I wish all those injured in this accident a swift recovery” PM Modi sent out a tweet.

Priyanka Gandhi Vadra, a Congresswoman, rushed to Twitter to express her condolences to the families of those killed in the traffic tragedy.

“Unfortunate news arrived of a vehicle accident in Kanpur. My heartfelt sympathies to the bereaved families. I wish to God for the quick recovery of the accident victims” Ms Priyanka tweeted in Hindi.