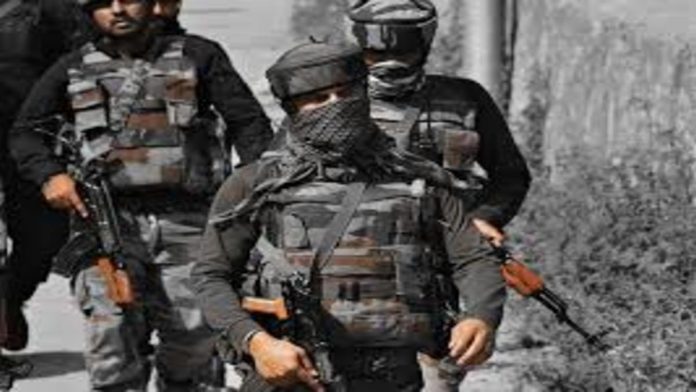 Police said that the militants were linked to The Resistance Front – – a offshoot of Lashkar-e-Toiba. Around three panches and sarpanches have been killed so far in March.

Sameer Ahmat Bhat was killed inside his residence on March 9 in Khonmoh region on the edges of Srinagar. After the incident, the police has assured security of all the representatives in the three-tier Panchayati Raj framework.

A cordon was laid in night after the information related to the presence of militants nearby, said Inspector General of Police in Kashmir, Vijay Kumar. The three militants killed were identified as Shakid Ahmad Tantry, Adil Nabi Teli and Yasir Ahmad Wagay, all the three from southern Kashmir.

The police said that they have found an AK rifle with two pistols from the militants and said that they were engaged in various attacks and were instructed to attack representatives of Panchayat and lead attacks on National Highway.

“Their masters don’t want the grassroots democracy to flourish here,” Vijay Kumar told media. He also said that the Police has successfully found how each militant was instructed to attack representatives from Panchayat.

Kumar also said, “We have killed 39 terrorists and arrested 24 terrorists and their associates this year. Also, 18 youngsters joined the terrorist ranks so far. More than 100 over ground workers have been arrested as well”.

Earlier in the month, the police had also busted militants instructed to kill a CRPF man and Territorial Army personnel in Budgam.

Kumar has even ensured that enough security has been established and arrangements for safe accommodation for the elected representatives of Panchayat Raj have also been made.

The fresh killing of three panches and sarpanches in March has spread dread among the representatives, the majority of whom like to remain in secure accommodation, as opposed to in their local towns from where they were elected and need to execute government works. A few delegates have made new requests to the organization for individual security officials and got accommodation.

“Pakistan never wants democratic process to be successful here. They don’t want development at the grassroots level. This is why they are getting sarpanches and panches killed, who are soft targets for them. But we have ensured that these modules are busted, arrested or neutralised in the encounters,” said the Inspector General. .