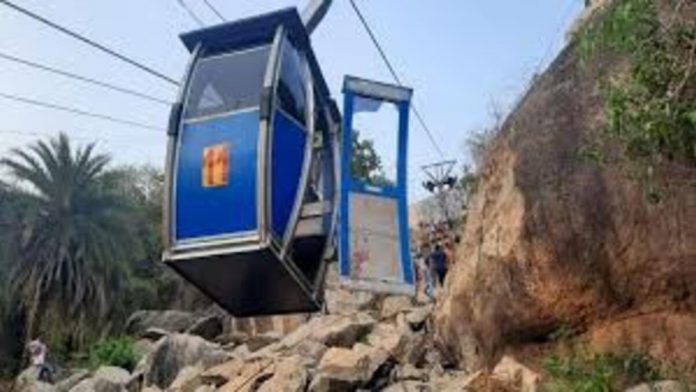 Three people dead and numerous others were injured as stranded cable cars dangled midair on the Deoghar ropeway after a 40-hour rescue attempt. On Sunday, two cable cars crashed near the Trikut Hills, resulting in a complete shutdown of operations. Two of the three people that died were slain during the rescue effort. While one guy died after falling from one of the Indian Airforce helicopters, another woman perished when the rope used to save her broke. The remaining 45 tourists trapped in the cable cars were freed on Tuesday.

The ropeway’s axle became loosened on Sunday, according to Jharkhand Tourism Department Director Rahul Sinha, culminating in a catastrophe.

When confronted with inquiries about the incident, the state administration defended itself by blaming Damodar Ropeway and Infra Limited (DRIL), the system’s operator, and placing it in the dock, claiming that its contract and licence had expired in 2019. The deal with Damodar Infra, according to Rahul Sinha, is valid from 2014 until 2019. During the Covid time, the contract could not be renewed.

However, Mahesh Moity, the General Manager of Damodar Infra, questioned how the ropeway could be run without the Jharkhand Tourism Development Corporation’s permission (JTDC). The revenue generated by the ropeway business is still shared by JTDC. He went on to say that the deal clearly stated that the corporation would receive two five-year renewals once the contract expired in 2019. The ropeway was still run in this manner by the corporation.

There appeared to be major oversights on the part of the state government, and it appears that the state tourism department purposefully neglected to monitor the ropeway’s operation and instead handed it over to a private company. In Trikut, the functioning of a ropeway was always fraught with danger. Apart from the annual maintenance, daily maintenance, and half-yearly maintenance, Damodar Infra stipulated that a rehearsal rescue operation be carried out every three months. However, these were openly mocked — and could be the cause of the disaster that ensued.

The rescue drills that were meant to be held every three months were not held, which was critical because the Trikut sector has been without electricity for the past two years, and the ropeway operation was run on gensets. The tourists were trapped in the cable cars for about 45 hours, with no net beneath the ropeway, due to a thick dark cover during the night. Due to the darkness, when the district commissioner arrived at the accident site after dusk, there was no way to begin a rescue operation.

In 2007, the ropeway service was established. JTDC was in charge for the first two years. Damodar Infra, on the other hand, has been operating since 2009.

The BJP blamed the event on the state government’s ineptitude, claiming that the ropeway’s upkeep had been overdue for two years. Banna Gupta, the state disaster management minister, and Jharkhand Chief Minister Hemant Soren, the chairperson of the Disaster Committee, have demanded a high-level investigation. There has been the formation of a high-level committee. Those responsible for the lapse, according to Hemant Soren, will not be spared. The matter has been taken Suo Moto before the Jharkhand High Court.

Nishikant Dubey, a BJP MP, said that no senior officials, including the chief secretary, were aware of what occurred at Trikut on Sunday until 6 p.m. He stated that he had told them. He claimed that if the government had been more proactive, the tragedy could have been avoided. He said that the rescue attempt was also delayed because the state administration failed to provide the necessary logistics for a chopper to arrive on time. “To save face, it now claims that the Damodar Infra contract expired in 2019. Who is to blame if Damodar Infra was operating without meeting the conditions, following the SOPs, and without government licence under the administration’s nose? It demonstrates the state government’s cooperation “According to Dubey.

The tragedy could have been caused by a lack of maintenance, according to Jharkhand Tourism Minister Hafizul Hasan. According to him, the culvert was discovered to be crooked and had been flowing in a worn condition for several days. The question is why the maintenance was not completed by the agency. Many experts claimed that the wire tension was insufficient. On Tuesday, however, the tourist minister and the district commissioner said Damodar Infra was operating legally.

An examination by a technical team in 2009 raised doubts about the ropeway project’s practicality. The ropeway’s cable trolley had increased vibrations, according to the members. Sanjay Kumar Sharma, Head of the Mechanical Department at Birla Institute of Technology, Mesra, and representatives of the Damodar Ropeways Company were among the members of the team. It was discovered that there was a high ascent in the upper area of the cable car, where there was considerable vibration. The trolley becomes unstable as a result of this. At the maximum height, the ropeway’s tension increases above usual. These were brushed aside.

Then-Finance Secretary Rajbala Verma voiced concerns and wrote a letter to then-Tourism Secretary Arun Kumar Singh, claiming that money spent on plans to enhance the tourist destination had been spent improperly. It should be investigated and a FIR filed with the ACB. These proposals also included the Trikut ropeway. In this instance, a guy named Bablu Kumar filed a plea in the Jharkhand High Court in 2010 requesting an investigation. The letters from the then-finance secretary and the PIL had no impact.

A probe has been ordered by the bench of Justice Sujit Narayan and Chief Justice Ravi Ranjan. The matter will be heard by the bench on April 26. Following the ropeway accident in Trikut, the Union Home Ministry has also issued an alert. Three injuries were also reported in 2011, implying that safety has been ignored in the past.