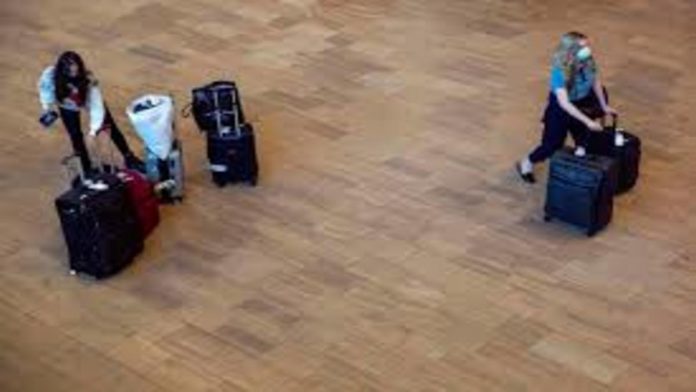 The finding of the new Omicron strain coronavirus has created a new worldwide problem. Several countries have strengthened travel restrictions, with others imposing lockdowns. The Indian government released amended criteria for international arrivals in India on Sunday, which will take effect on December 1. Prior to the journey, the amended standards require submitting 14 days’ worth of travel details and uploading a negative RT-PCR test report to the Air Suvidha portal.

Researchers in South Africa discovered the variety just a few days ago, and nothing is known about it, including if it is more contagious, more likely to cause serious disease, or more able to resist vaccine protection.

However, several governments rushed to intervene, fearful of prolonging the outbreak, which has claimed the lives of almost 5 million people.

INDIA REVISES GUIDELINES FOR INTERNATIONAL TRAVELLERS
Travelers from ‘at-risk nations’ will be required to take a Covid test after arrival and wait for the results at the airport, according to the Health Ministry’s rules. If they test negative, they will be placed on a seven-day home quarantine. On the eighth day, retest, and if negative, continue self-monitoring for the next seven days.

Travellers from countries other than the ‘at-risk’ countries will be allowed to leave the airport and will be required to self-monitor their health for 14 days. At the airport, a random subset of passengers (5 percent of total aircraft passengers) should be subjected to post-arrival testing.

The administration placed a handful of countries in the ‘at risk’ category on Saturday. South Africa, China, Botswana, and European countries such as the United Kingdom, Brazil, Israel, Bangladesh, Mauritius, New Zealand, Zimbabwe, Singapore, Israel, and Hong Kong are among them. In addition, the Centre instructed state and union territory governments to promote Covid-19 testing, improve healthcare facilities, and expand genetic sequencing.

WHAT DOES THE WHO SAY?
According to the World Health Organization, it is “not yet apparent” whether the newly discovered coronavirus variant Omicron is more transmissible or causes more severe disease than previous variants, such as the highly transmissible and globally ubiquitous Delta variant. “At this time, there is no evidence that symptoms related with Omicron are distinct from those associated with other variations,” the WHO stated.

It went on to say that the first infections were among university students, who are younger and had a milder condition, but that determining the severity of the Omicron form will take days to weeks.

Furthermore, preliminary research suggests that Omicron may have a higher risk of reinfection than other variations of concern (i.e., those who have previously had Covid-19 may be more easily reinfected with Omicron), but information is “limited,” according to the WHO.

SOUTH AFRICA TO REMAIN ON LOWEST LOCKDOWN LEVEL
Despite global fear over the discovery of the Omicron type in South Africa, President Cyril Ramaphosa announced on Sunday that the country will remain on the lowest ‘Level One’ of its five-level lockdown policy to combat the Covid-19 epidemic. Ramaphosa also urged more than 20 nations that have implemented travel bans to and from South Africa and its neighbours to lift them quickly to avoid further economic damage to these countries’ economies, which have already been hit hard by the pandemic.

In response to the travel ban, Ramaphosa demanded that it be lifted immediately. “(The embargo) is a clear and wholly unwarranted departure from many of these countries’ commitments made at the G20 conference in Rome last month.”

NETHERLANDS MOVE INTO TOUGHER LOCKDOWN
Even before the country registered its first verified instances of the new Omicron virus type, the Netherlands went into a tighter lockdown on Sunday, citing an increase in illnesses. Under the new lockdown, bars, restaurants, non-essential retailers, cinemas, and theatres were among the public places compelled to close from 5 p.m. to 5 a.m.

The ban went into effect just hours after Health Minister Hugo de Jonge said that at least 13 passengers arriving at Amsterdam’s Schiphol Airport on Friday had tested positive for the new variety. He advised other travellers arriving from southern Africa last week to be tested as well.

FACE MASKS COMPULSORY IN UK
The Health Security Agency (UKHSA) announced on Sunday that a third instance of the Omicron coronavirus strain has been discovered in the UK. The most recent case is linked to a trip to southern Africa, where the variation was discovered, but the person is no longer in the UK. As part of the tougher Covid-19 limitations being implemented in response to two cases of the novel Omicron form found in the country, the UK government said that facial coverings will become a mandatory requirement in stores and public transportation in England starting Tuesday.

Sajid Javid, the Health Secretary, warned that all foreign visitors to the UK will be required to take mandatory PCR testing “as soon as practicable.” The minister stated that he expected all of the new measures, which were put in place to give experts more time to investigate Omicron’s infectiousness and vaccination resistance levels, to be lifted “within weeks.”

ISRAEL TIGHTENS TRAVEL RESTRICTIONS
As part of its attempts to combat a novel coronavirus type, Israel approved banning foreign nationals from entering the country and the deployment of contentious technologies for contact tracing on Sunday.

The Health Ministry said the country’s coronavirus cabinet had approved a slew of measures, including putting 50 African countries on a no-fly list, prohibiting visitors from entering, and requiring all Israelis arriving from abroad to undergo quarantine.

MOROCCO HALTS ALL INCOMING FLIGHTS
Morocco’s Foreign Ministry announced Sunday that all incoming air travel from around the world will be suspended beginning Monday for two weeks due to the rapid spread of the new omicron form.

The decision was made to “preserve Morocco’s successes in the fight against the epidemic, and to protect residents’ health,” according to the ministry. The expansion of omicron across Africa and Europe was recognised.

SPAIN TO NOT ALLOW UNVACCINATED BRITISH VISITORS FROM DEC 1
Beginning December 1, Spain will not accept unvaccinated British travellers. Italy was reviewing a list of airline passengers who had arrived in the previous two weeks. Vaccinations and booster shots are still being promoted in France.