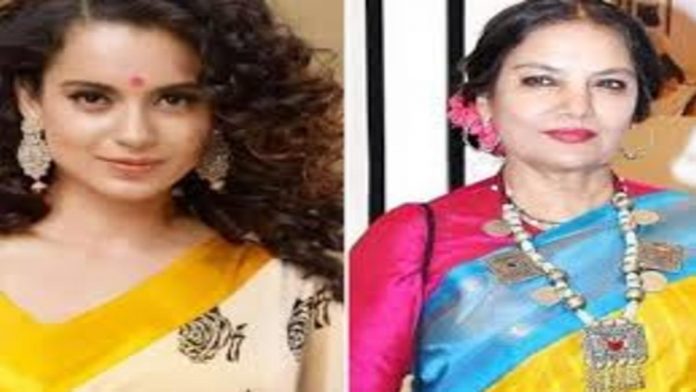 Shabana Azmi, a veteran actress, has chastised Kangana Ranaut for her recent statements on the ongoing hijab dispute in Karnataka. Shabana’s husband, lyricist Javed Akhtar, previously expressed his views, saying that while he was never a fan of the burqa or hijab, he condemned any form of “hooliganism” in the name of demonstrations.

Kangana took to Instagram on Thursday to express her feelings about the ongoing hijab dispute in Karnataka, which centres on whether or not students should be allowed to wear hijab (a headscarf worn by Muslim women) in educational institutions. Kangana shared author Anand Ranganathan’s essay, writing, “If you want to show courage in Afghanistan, don’t wear a burqa. Instead of enclosing oneself in a cage, learn to break free.”

“Correct me if I’m wrong but Afghanistan is a theocratic state and when I last checked India was a secular democratic republic?!?” Shabana wondered on Friday, sharing a part of Kangana’s post on her official Instagram feed.

“We cannot teach people, thank you ma’m,” one individual said in response to Shabana’s message. “Perhaps she doesn’t comprehend the difference!” suggested another. “Not only the largest democracy (on paper), but also the largest diversity,” one added. “There is no point in expecting anything sensible or logical from Kangana,” one person commented, lashing out at Kangana.

On Wednesday, Javed expressed his thoughts on the hijab debate, writing, “I’ve never been a fan of the hijab or the burqa. I still believe that, but I have nothing but scorn for these hordes of hooligans who are attempting to intimidate a tiny number of females, and failing miserably. Is this how they define ‘MANLINESS’? What a shame.”

The demonstrations in Karnataka began last month, when a few students at the Government Girls PU College in Udupi said they were barred from attending courses because they wore hijab. Several acts of unrest have occurred in the state since then. On February 5, the Karnataka government issued an order requiring a dress code in all schools and institutions, with clothing that “disturbs equality, integrity, and public law and order” being prohibited. The case was brought before the Karnataka High Court this week, but the court rejected to give any interim orders and referred the case to a larger bench on Wednesday.