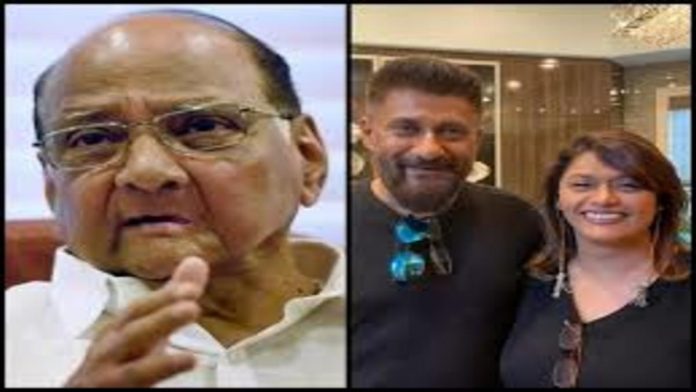 Director Vivek Agnihotri expressed surprise and said he doesn’t know what’s wrong with Nationalist Congress Party Sharad Pawar, who claimed on Thursday that a film like The Kashmir Files should not have been allowed for screening. Vivek Agnihotri and his wife, actor Pallavi Joshi, congratulated and blessed Sharad Pawar and his wife on a flight a few days ago, according to Agnihotri. “I’m not sure what happened to him in front of the cameras. Despite his obvious hypocrisy, I admire him “According to Vivek Agnihotri.

“On a trip just a few days ago, I met Shri @PawarSpeaks ji and his respected wife, touched their feet, and both of them congratulated and blessed me and Pallavi Joshi on the film,” Vivek Agnihotri tweeted.

“Such a film should not have been permitted to be shown. However, it is granted tax breaks, and those in charge of keeping the country united are encouraging people to watch the film that incites rage “Sharad Pawar said this while speaking at a convention of his party’s minority department in Delhi.

Pawar added that if the Narendra Modi government truly cared about Kashmiri Pandits, it should work to rehabilitate them rather than inciting them against minorities. Pakistan-based terror groups were to blame for attacks on Kashmiri Pandits and Muslims, he added. Pawar claims that VP Singh was prime minister when Kashmiri Pandits were forced to flee the Valley, and that Jawaharlal Nehru’s name has been dragged into the discussion for no reason. Farooq Abdullah, the chief minister of Jammu and Kashmir, resigned over conflicts with Jagmohan, and it was the governor who aided the exodus of Kashmiri Pandits from the valley, according to Pawar.

Pawar also chastised the BJP for pursuing Arvind Kejriwal, the Delhi Chief Minister, over his comments on The Kashmir Files. “Political dissent is welcome, but Kejriwal has been chastised for advocating for minorities. The BJP is steering the country in a new direction. It is eroding the country’s unity “Pawar explained.

The Kashmir Files has been the subject of debate since its debut because of its portrayal of the flight of Kashmiri Pandits from the Valley. Almost all political leaders have been embroiled in debate about their opinions on the film.