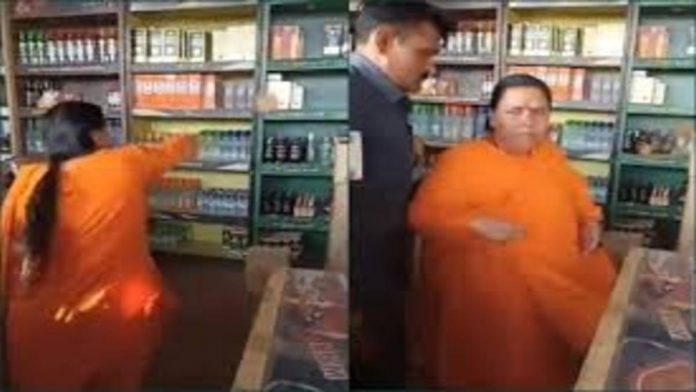 Uma Bharti, a former union minister, tossed a stone at a liquor shop in Bhopal’s Barkhera Pathani neighbourhood on Sunday (March 13, 2022). The BJP representative entered a liquor store and hurled a stone at alcohol bottles, stating that the establishment was causing difficulties for women in the neighbourhood.

The BJP politician said in a video shared on her Twitter account, “Numerous liquor outlets offer alcohol to residents of this slum in Bhopal’s Azad Nagar. Laborers’ whole savings are squandered on booze. Residents, particularly women, demonstrated against the establishment of stores that violated government regulations.”

“The government has often stated its intention to close these businesses, but no action has been done throughout the years. Today, I requested that the local authorities close these booze stores and kiosks within a week,” the former Madhya Pradesh chief minister said.

A video of the event quickly gained widespread attention on social media. In the footage, the former Madhya Pradesh chief minister is seen approaching a booze store flanked by fans and local citizens, lifting a stone and flinging it at several bottles on the shelf. Following that, her supporters shout pro-Bharat Mata chants and also chant ‘Bharat Mata ki jai’.

The former Union minister’s move serves as a warning to the local authorities to close the booze store within a week. The Bharti has been vigorously pushing against the usage and sale of booze for the past six months. The BJP leader described her assault on a booze store as the “first of many actions” in this approach.