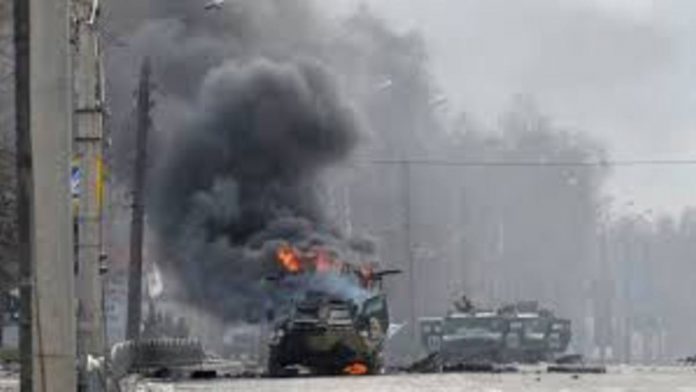 As per Ukraine’s claims total 352 civilians including 14 children have lost their live in Russia’s invasion that started from last Thursday. The two countries are on talks over Russia’s condition.

Russia’s cannonry has attacked several parts of Kharkiv city, which is second largest city in Ukraine. Around 11 people so far have been killed in shelling in the city.

According to UN’s refugee arm, over half a million people have crossed borders from Ukraine to save their lives since Russia invaded last week.

Russian President Vladimir Putin told France’s Emmanuel Macron a Ukraine settlement was possible only on a condition of Ukraine being neutral, “denazified” and “demilitarized” and Russian command over attached Crimea was officially perceived.

Russian and Ukrainian diplomats will return to their capital cities for discussions and have decided for further talks, both countries declared after first round of talk.

Russia has been isolated internationally after the initiatives to solve the conflict failed.

The United Nations General Assembly is holding session on Russia-Ukraine crisis and is set to vote to isolate Russia later in the week.

Meanwhile, India for the second time has abstained from voting in UN resolution over Russia’s invasion. However, the move by Moscow and Kyiv to hold talks is welcomed by New Delhi.

12 Russian diplomats have also been expelled from United Nations over security concerns.

Congress leader Navjot Singh Sidhu has been shifted to barrack number 7 in Patiala jail in Punjab as prisoner number 241383. On Friday, the leader...
Read more
In Focus

The Centra Bureau Of Investigation on Friday conducted raids at 17 places in connection with land for job scam related to Rashtriya Janata Dal...
Read more
In Focus

At least eight people are dead and five missing as the flood situation and landslides in Assam continues. Over 1,089 villages are still merged...
Read more
In Focus

The China Eastern Airlines aircraft which crashed in March in the Gaungxi of China was deliberately crashed as data from black box now shows...
Read more
- Advertisement -