Russia Will Achieve Goals In Ukraine Only Through ‘Dialogue Or Conflict’, Says Putin 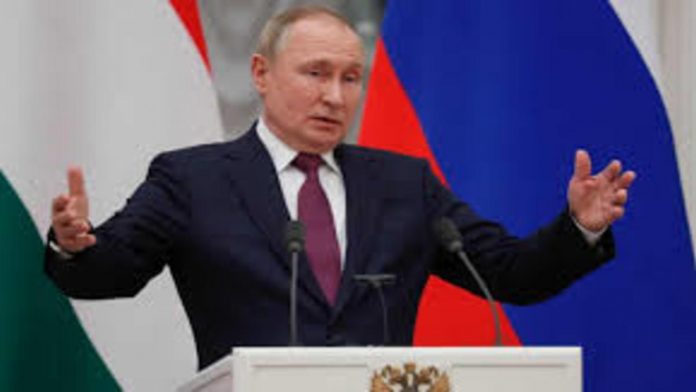 Russian President Vladimir Putin assured his French colleague Emmanuel Macron on Sunday that Russia will achieve its goals in Ukraine through “dialogue or conflict.” This remark comes after Russia’s invasion of Ukraine has been ongoing for more than 11 days.

At least 351 Ukrainian citizens and 498 Russian military have died as a result of the crisis.

According to the latest UN estimates, the Russian military incursion in Ukraine has pushed over 1.5 million people to evacuate the country. These migrants, the majority of whom are Ukrainians, have sought safety in neighbouring Poland, Romania, and Moldova.

Over 1,100 individuals have been imprisoned in Russia, according to reports, for participating in ‘anti-war’ protests against the invasion of Ukraine.

Two rounds of discussions between Russian and Ukrainian teams to establish a ceasefire have already taken place, with the third meeting scheduled for March 7.

On Sunday, Ukraine’s President Volodymyr Zelenskyy held a press conference, repeating his call for a ‘no-fly zone’ over the country. In an apparent plea to Nato, Zelenskyy added, “The world is strong enough to close our skies.”

Meanwhile, US Secretary of State Antony Blinken stated that the US had “extremely credible reports” that Russia committed war crimes in Ukraine during its invasion. On Sunday, Blinken met with Ukraine’s Foreign Minister, Dmytro Kuleba, at the Ukrainian-Polish border.

Russian forces encircle Mariupol
Civilian evacuation in Mariupol, Ukraine’s eastern port city, was “halted” for the second day in a row, with Russia and Ukraine blaming each other. According to the latest reports, Russian forces have encircled Mariupol.

Russia is prepared to destroy Odessa, Ukraine’s main port city, according to Ukrainian President Zelenskyy. He further claimed that on Sunday, a volley of Russian missiles destroyed the airport in Vinnytsia, Ukraine’s centre region.

Meanwhile, Russia continued to bombard Ukraine with missiles and artillery. While Moscow claims to be targeting solely military targets, reports indicate that civilian structures have been attacked in a number of Ukrainian cities, including Irpin and Chernihiv.

Fighting for control of Kharkiv, Mykolaiv, Chernihiv, and Sumy, among other places, continues between Russian and Ukrainian forces. Last week, Russia took control of the port city of Kherson.

However, a Russian armoured column caught on satellite imagery remains halted outside of Kyiv, Ukraine’s capital.

Putin speaks to Macron, Erdogan
Putin criticised Ukrainians for the failure of civilian evacuations in Mariupol during a phone chat with French President Emmanuel Macron on Sunday, and claimed Russia had no plans to target Ukraine’s nuclear power reactors.

In a phone discussion with his Turkish counterpart Recep Tayyip Erdogan, Russian President Vladimir Putin said the’special military operation’ in Ukraine can only be terminated if Kyiv ends military activities and complies with Moscow’s requests.

“Even if the chance is not great — as soon as there is even a small opening, and we have access to all sides and the capability,” Naftali Bennett said when asked why he is trying to play the role of peacemaker between Russia and Ukraine, he said, “I see this as our moral obligation to make every effort.”

Operation Ganga
As part of Operation Ganga, India was able to evacuate nearly 15,920 of its students from Ukraine via 76 flights, according to Union Minister Jyotiraditya Scindia.

Meanwhile, the Ministry of External Affairs (MEA) has requested that all Indian citizens still in Ukraine complete an online form.

In Pisochyn and Kharkiv, nearly all Indian citizens have been evacuated.

In addition, a team from the Indian embassy in Kyiv has been stationed in Poltava to organise the safe passage of students trapped in Sumy.