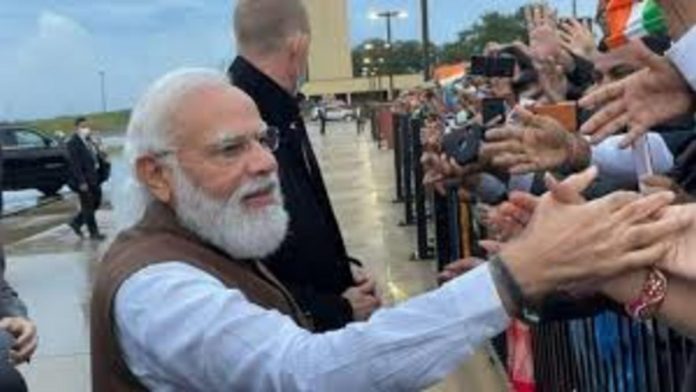 Prime Minister Narendra Modi has arrived in US to participate in the first in-person summit of Quad leaders on the invitation of President Joe Biden. PM Modi will also address the UN General Assembly there.

The Prime Minister arrived at the Joint Base Andrews in Washington DC, where he was welcomed by a huge crowd of Indian Americans changing his name and waving Indian flag amid light showers. Although it was raining in the early morning but the crowd still managed to gather to welcome the Prime Minister.

Senior officials from Biden’s administration and India’s Ambassador to US, Taranjit Singh Sandhi received PM Modi at the airport. “Grateful to the Indian community in Washington DC for the warm welcome. Our diaspora is our strength. It is commendable how the Indian diaspora has distinguished itself across the world,” said PM Modi in a tweet.

The PM who is visiting US for the seventh time after coming in to power since 2014 said that the visit is an “occasion to strengthen our strategic partnership with the US and consolidate ties with Japan and Australia”. In India also before he left for US, he said that in his meeting with President Biden, he would discuss the India-US Comprehensive Global Strategic Partnership and exchange views on regional and global issues of mutual interest.

Speaking on the Quad Summit, he said that his meeting with President Biden, Prime Minister Yoshihide Suga of Japan and Prime Minister Scott Morrison of Australia will provide an opportunity to take stock of the outcomes of the virtual summit in March and “identify priorities for future engagements based on our shared vision for the Indo-Pacific region”.

The central focus of the talks between Prime Minister Narendra Modi and President Joe Biden on September 24 would be on the Afghan situation and its implications, ways to stem radicalism and cross-border terrorism, China’s growing assertiveness, and further expansion of India-US global partnership.

It is the first abroad visit beyond neighborhood of PM Modi after Covid-19 outbreak, so he is accompanied by the high-level delegation including National Security Adviser Ajit Doval and External Affairs Minister S Jaishankar.

Along with President Biden, PM Modi’s meeting with Vice President Kamala Harris is also planned. Following his first meet with her, PM Modi said he is “looking forward” for the talks with her to explore opportunities for cooperation, mainly in the area of science and technology. The duo had talked in June over phone.

Apart from this the Prime Minister is also scheduled to meet a number of top executives of major American companies like Adobe, General Atomics, Qualcomm, Blackstone and First Solar, a news agency reported.

Later on September 24, PM Modi will travel to New York to address the United Nations General Assembly, where he will speak on some global challenges including the Covid-19 pandemic, climate change, the need to combat terrorism and other important issues.

The last time Prime Minister Narendra Modi visited US was in September 2019 when he and then US President Donald Trump had addressed the ‘Howdy Modi’s event in Houston.