NDRF, SDRF Rescued 87 After Boat Sank In Brahmaputra In Assam 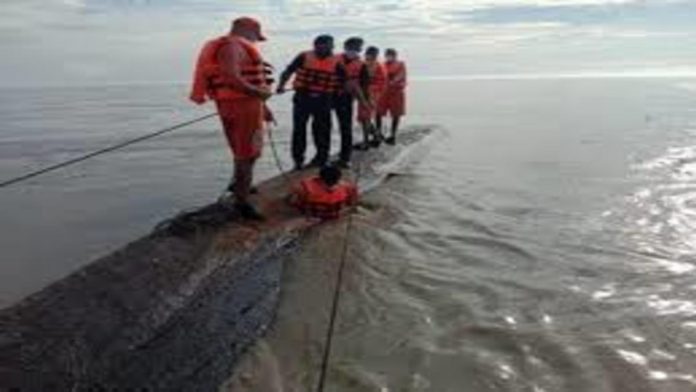 A boat sank in the Brahmaputra river near Nimati Ghat in the Jorhat district of Assam on Wednesday, killing one person and leaving two others missing. Here’s everything you need to know about it.

 Teams from the National Disaster Response Force (NDRF), the State Disaster Response Force (SDRF), the state fire department, have rescued at least 87 persons, the Assam State Disaster Management Authority (ASDMA) said. “At least 87 people have been rescued or traced so far. Till this morning, we have received seven missing reports of seven people and out of them we have been able to trace five. NDRF, SDRF teams are engaged in rescue operations,” Chief Executive Officer of ASDMA, GD Tripathi said.

 Parimita Das, a 30-year-old college teacher, has been identified as the deceased woman.

 The Jorhat Medical College and Hospital is currently treating eight people. The Jorhat district administration has set up hotels for those who have been rescued.

 The capsized boat has been sliced apart by NDRF and SDRF crews, according to the ASDMA, but no bodies have been discovered.

 According to a CMO release, the chief minister would visit Nimati Ghat on Thursday.

 The ASDMA has established helpline numbers to disseminate accident-related information. The numbers are 1070, 1079, and 1077, according to an agency official.

 Three officials from the Department of Inland Water Transport (IWT) have been suspended for alleged negligence of duty, while senior politicians have accepted that there were lapses and that the “guilty” will be punished.

 Amit Shah, the Union Home Minister, contacted Assam Chief Minister Himanta Biswa Sarma to inquire about the accident and get an update on the rescue operations and the conditions of those who have been rescued so far.

When the private boat ‘Ma Kamala’ was heading to Majuli from Nimati Ghat and the state’s Inland Water Transport (IWT) Department’s ferry ‘Tripkai’ was arriving from the riverine island, an accident happened.

“After sinking, it swept around 1.5 km away and stuck in the bed of the river. The boat is upside down now and we are not able to turn it around. Once we can do that, we will be able to see if anybody is stuck there,” Jorhat Deputy Commissioner Ashok Barman said.

“The boat capsized and sank,” an official of the IWT Department said.

President Ram Nath Kovind and Prime Minister Narendra Modi expressed grief over the boat accident. “My thoughts go out to the victims, survivors and their families. Rescue and relief efforts are on to save as many lives as possible,” Kovind said.

“All possible efforts are being made to rescue the passengers. I pray for everyone’s safety and well-being,” PM Modi tweeted.

Assam Chief Minister Himanta Biswa Sarma responded to Modi’s tweet by saying he is personally overseeing the rescue efforts. In a tweet, he said, “All the injured are being diligently attended to.”

Assam Governor Jagdish Mukhi expressed his concern about the disaster in a statement, saying the state government has initiated a large rescue operation using its men and resources.

“All possible steps are being taken to rescue the victims and give adequate medical attention to the rescued people,” he added.

Sarbananda Sonowal, Union Minister of Shipping, Ports and Waterways and a native of Assam, expressed sincere sorrow and worry over the Brahmaputra tragedy. He talked with Sarma over the phone and got an update on the continuing rescue and relief efforts.