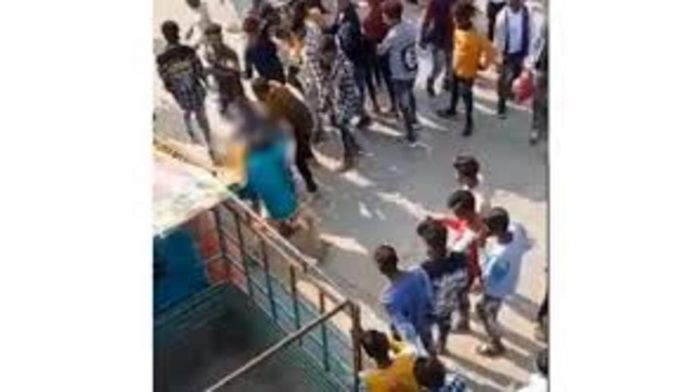 Two teenage ladies are sexually abused by a bunch of men during a traditional tribal celebration in Madhya Pradesh, according to a distressing video. The footage starts with one of the ladies hiding behind a truck when she is assaulted by a guy who is passing by.

She is saved by a bystander who dislodges the guy. However, her experience is far from over. A few seconds later, another guy is seen attempting to force his way inside her. He then takes her towards a gathering of males, with some of them groping her.

The second lady is seen being attacked by a male in the same frame.

Numerous guys are seen on their phones documenting the situation, but no one rushes to the women’s assistance.

The week-long Bhagoria celebration kicked off on Friday in Alirajpur, Jhabua, Dhar, Barwani, and Khargone districts. Local officials and police say they have made enough security and other measures to accommodate thousands of people. However, the heinous occurrence on the festival’s first day cast doubt on the administration’s statements.

Manoj Kumar Singh, Superintendent of Police, Alirajpur, said, “Two of the defendants were arrested after the filing of the FIR, but the principal defendant remains at large; all of the defendants have been identified. We learned about the video yesterday and took action on our own initiative, since the victim had not filed a complaint. We’ve organised multiple squads, and they’re all about to be arrested.”

Bhagoria is one of the most important and well-known yearly festivals in Madhya Pradesh’s tribal-dominated areas.