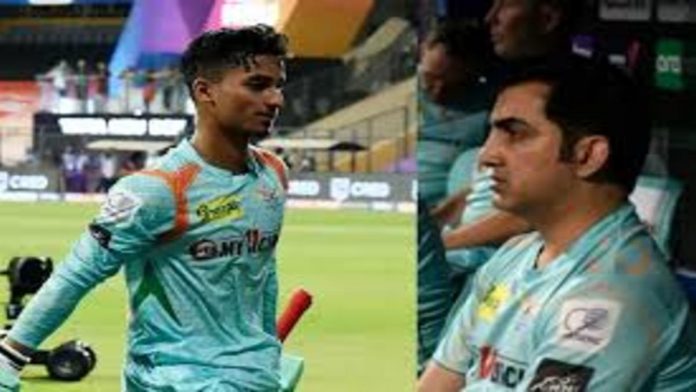 Gautam Gambhir, a two-time World Cup winner and the coach of the Lucknow Super Giants (LSR), says it is too early to discuss fascinating emerging talent Ayush Badoni, who recently made his Indian Premier League (IPL) debut against Gujarat Titans (GT). Badoni had received praise for his batting heroics in Lucknow’s IPL 2022 opener at the Wankhede Stadium against the Gujarat Titans.

In his first match in the lucrative league, explosive batsman Badoni hit his first half-century to help Lucknow recover from a loss to newcomers Gujarat in a battle of the IPL debutants. In the build-up to LSG’s match against Chennai Super Kings (CSK) at Mumbai’s Brabourne Stadium on Thursday, mentor Gambhir lauded the Delhi teenager when questioned about the Lucknow franchise’s new recruit. Gambhir also gave the Lucknow franchise credit for spotting Badoni’s potential.

Despite the fact that Badoni made a good debut against the Gujarat Titans, Gambhir believes that one innings does not make a teenager a superstar in the IPL. “It’s too early to talk about him too much because one inning does not make you a star. Yes, he’s a natural performer, which is why he’s in this dressing room. We were able to recognise his ability. We’ve known him for quite some time because he’s from Delhi. The most essential thing for him is to be balanced, and keeping him balanced is also vital for us “Before the match, Gambhir told Star Sports.

Earlier, young Badoni commended Gambhir with encouraging him to play his natural game in the richest T20 tournament in the world. In the 20-over match against Gujarat Titans, Badoni’s 41-ball 54 powered Lucknow Super Giants to 158-6. “Gautam bhaiya (brother) was a huge supporter of mine. He advised me to simply play my natural game. You won’t get the one-of-a-kind match, but you will have a proper run, he said. ‘You don’t have to play according to the situation,’ he added. Senior players are capable of doing so. You demonstrate your natural game to us’, “Badoni had stated previously.