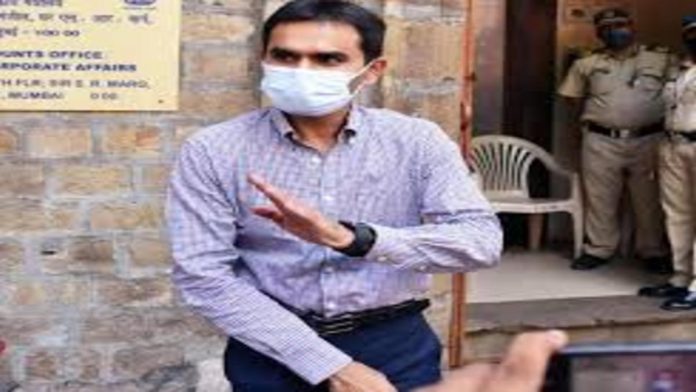 The in-charge officer of Mumbai cruise drugs case in which superstar Shah Rukh Khan’s son was arrested, has been removed from the case amid the charges of extortion against him. The officer was heading six such cases.

Now a SIT headed by senior police officer Sanjay Singh, a 1996 batch officer from Odisha cadre will take over the Aryan Khan’s case and also of the Maharashtra minister Nawab Malik’s son-in-law.
The SIT is set to reach Mumbai today.

The minister has been continually alleging the NCB and it’s Mumbai Zonal Director Sameer Wankhede. Today he has claimed that he requested for a SIT to investigate the charges against the officer.

The NCB in a statement delivered the previous evening, which was signed by Sanjay Singh, has focused: “No officer or officers have been REMOVED from their present roles”.

Not long after news broke that the cases were being moved, Mr Wankhede told media “I have not been removed  from anywhere” and that he had requested the cases to be moved out.

“I’ve not been removed from investigation. It was my writ petition in the Bombay High Court that the matter be probed by a central agency like the CBI or NIA. Based on that, a SIT has now been formed under the leadership of a senior officer…” he told media over phone.

Sameer Wankhede is at the focal point of after allegations from Nawab Malik and Prabhakar Sail, a NCB witness in the Aryan Khan case, brought his record and supervison of cases into question.

Amid the huge criticism and examination against Mr Wankhede, the anti-drugs agency had publicly supported him, refering to an “impeccable service record… replete with honesty and integrity”.

The NCB’s support came after Mr Sail registered an affidavit saying he caught a discussion between his employer KP Gosavi (another organization witness, whose selfie with Aryan after his capture brought up more issues about the NCB’s case), SRK’s director Pooja Dadlani, and a Sam D’Souza this month.

Mr Sail said they conversed about ₹ 18 crore deal, of which ₹ 8 crore was for Mr Wankhede.

The agency hit back with its very own affidavit that claimed allegations were being devised to “malign the agency’s image”, and Mr Wankhede denied all the extortion allegations.

He additionally kept in touch with Mumbai Police complaining about “precipitate legal action” to “frame” him, and was told he would be given three days’ notice in case of a arrest request.

On the other hand, Mr Wankhede also had registered an affidavit in which he claimed of being “personally targeted”, refering the continuous attacks by Mr Nawab Malik.

Soon after the news of Mr Wankhede being removed from his post, Mr Malik tweeted “this is just the beginning”.

“Sameer Wankhede removed from five cases, including the Aryan Khan case. There are 26 cases that need to be probed. This is just the beginning… a lot more has to be done to clean this system and we will do it,” said the Minister. He has also announced to hold a press on Sunday.