How India Is Performing In Tokyo Olympics So Far 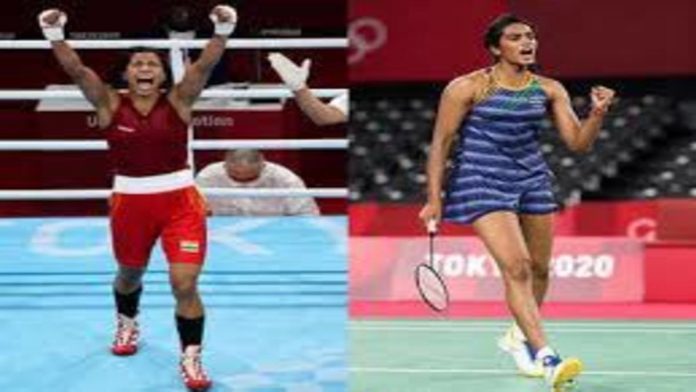 India had another successful day in the Tokyo 2020 Olympics, winning its second medal on the seventh day of the quadrennial event in Japan. Women once again led the way for India, with boxer Lovlina Borgohain becoming the country’s second Olympic medalist following Mirabai Chanu.

The greatest triumph for Team India on Friday was Lovlina Borgohain’s quarterfinal victory in the women’s welterweight category. Borgohain, the first woman from Assam to compete in the Olympics in boxing, is now guaranteed at least a bronze medal.

PV Sindhu, the world number one in badminton, then added to India’s pleasure by winning her women’s singles quarterfinal, putting her on the edge of becoming the first Indian woman to win two individual Olympic gold if she wins her next match.

Both the men’s and women’s hockey teams won their respective fixtures, giving India a double celebration.

However, not every script went India’s way, as Deepika Kumari, Manu Bhaker, and Simranjit Kaur all failed to qualify for the Olympics after a series of poor performances on Thursday.

Let’s take a look at Team India’s successes and failures at Tokyo 2020 on Thursday.

Lovlina Stuns Ex-World Champion
Lovlina Borgohain has written the book on history! After defeating former world champion Chen Nien-Chin of Chinese Taipei in the quarter-finals of the Women’s Welterweight boxing at the Kokukigan Arena on Friday, she has ensured India’s second medal at the Tokyo Olympics.

Lovlina Borgohain is certain of at least a bronze medal after qualifying for the semi-finals. She is only the third Indian boxer to win an Olympic medal for India, following Mary Kom and Vijender Singh.

Sindhu Decimates Yamaguchi
PV Sindhu put on a powerful exhibition of badminton on Friday, decimating 4th seed Akane Yamaguchi in a one-sided quarter-final match at the Musashino Forest Plaza in Tokyo, displaying hints of form that led her to World Championship gold in 2019.

Sindhu advances to the Tokyo Olympics semi-finals with a 21-13, 22-20 victory, putting her one step closer to a second Olympic medal. In Rio, the incumbent world champion earned Olympic silver, losing only to Carolina Marin, who had withdrawn from Tokyo 2020 due to an ACL injury.

Despite a late push from the Japanese shuttler in a closely contested second set, Sindhu needed only 56 minutes to defeat World No. 5 Akane Yamaguchi 21-13, 22-20. Sindhu had to save two game points while maintaining her composure to win the match in straight games.

Best Day for Indian Hockey
India’s best day in hockey came in Tokyo, where both the men’s and women’s teams won in a matter of hours.

In a thrilling 1-0 win over Ireland in their Pool A encounter at the Oi Hockey Stadium North Pitch, India’s women’s hockey team kept their dreams of advancing for the quarter-finals of the Tokyo Olympics alive by grabbing a late winner.

Meanwhile, the men’s team achieved a hat-trick of victory by defeating Japan 5-3 in their last Pool A match, finishing second behind Australia with four wins out of five.

The Indians have made a remarkable recovery after being defeated 7-1 by Australia in their second game of the group round. They kept on top in their matches against Spain and the defending champions Argentina, erasing the negative goal difference from the previous match.

Avinash Sable, on the other hand, recorded the 13th quickest time overall and was just outside the top 16 qualifiers for the final. The top three racers from each heat, as well as the next six fastest runners, advance to the final.

Pistol Campaign Over for India and Man
India’s pistol shooters will return home empty-handed from the Tokyo Olympics, as some of the country’s most-talked-about athletes, such as Manu Bhaker and Abhishek Verma, failed to create an impression in their Olympic debuts. This is the second time India has failed to win a medal in pistol shooting at an Olympic Games.

She would have qualified for the final of the 25m Pistol Women with another 292 points, but despite being agonisingly close, the teenager was unable to qualify. In the Rapid, she shot 290 and remained in contention until the final sequence, when she shot an 8. Meanwhile, world No. 2 Rahi Sarnobat was eliminated from the competition after scoring 573 points (287 in Precision and 286 in Rapid).

Deepika Kumari Flops Again
Deepika Kumari made history by being the first Indian archer to reach the quarter-final rounds of the Tokyo Olympics. However, the World No. 1 archer will not be satisfied with that achievement, as she will be returning home empty-handed from her third Olympic campaign.

Deepika Kumari was defeated 0-6 by Korea’s spectacular An San in the Women’s Individual quarter-finals. Deepika put on an unremarkable performance, scoring 4 out of 7 arrows against the first seed Korean, who is aiming for her third gold medal at the Tokyo Games. An San, a 20-year-old from Tokyo, has already won the Women’s and Mixed team events.

Archery: Deepika loses 0-6 in the quarter-finals to Korea’s An San, ending her Olympic medal hopes in 2021.

Athletics: Dutee Chand finishes 7th in Women’s 100m Heat 5 but does not advance to the next round.

Athletics: Avinash Sable smashes his own national mark in the Men’s 3000m Steeplechase with a time of 8:18.12s, but he fails to qualify for the final.

Boxing: Simranjit Kaur loses her Women’s Lightweight Round of 16 bout to Thailand’s Sudaporn by unanimous decision.

Hockey: India’s men’s hockey team defeats Japan 5-3 to finish second in Pool A with four victories out of five games.

Athletics: India’s mixed relay team (4x400m) finished eighth in Heat 2 with a timing of 3:19.93s, failing to qualify for the final event.