How BJP And BSP Turned To Have Agreements Amid UP Polls 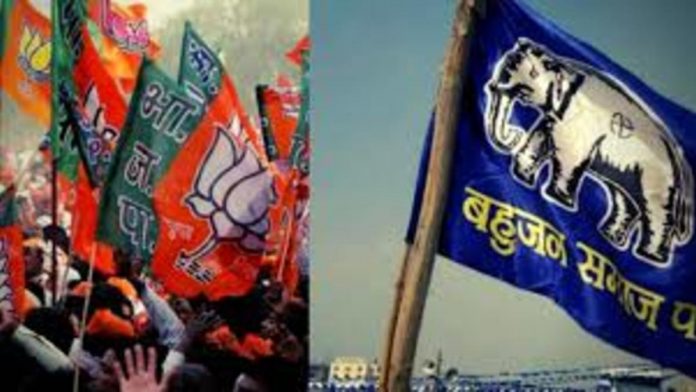 Halfway through the Uttar Pradesh elections, the BJP and BSP appear to have found an unlikely point of agreement: Mayawati’s party’s performance on March 10. First, Amit Shah, a top BJP leader, said News18 in an interview that Mayawati remained “important” despite political predictions, and that the BSP will gain Muslim support in addition to Jatav votes. Mayawati commended Shah for his “greatness” in stating the same thing on Tuesday, and claimed the Samajwadi Party was wrong in assuming that it would corner the Muslim vote.

In fact, an examination of the BSP’s candidates reveals that the party may cause more harm to the SP than to the BJP on more seats.

One reason is the BSP’s large number of Muslim candidates in an election when the SP hopes to beat the BJP by gathering all of its Muslim and Yadav voters, as well as votes from other communities.

Both the BSP and the SP coalition have nominated Muslim candidates in at least 28 seats. The majority of these seats are in western Uttar Pradesh, where the SP expected the fewest problems after forming an alliance with the RLD to unite Muslim and Jat voters.

While Muslims are more or less voting for the SP alliance, there will be a split in seats where the BSP has a strong Muslim candidate, according to SP and BSP leaders. “Most voters have accepted the partnership to avoid wastage of votes,” a BSP leader stated, “but the BSP will also gain a minor portion depending on the candidate.”

In a few seats, the BSP has fielded Yadav candidates as well. Like Malhani, who is up for re-election in the final phase on March 7. With both the SP and BSP fielding Yadav candidates, the BJP is optimistic about its Thakur candidate’s chances in the Yadav-dominated seat.

While the Brahmin community appears to be dissatisfied with the Yogi Adityanath government, the opposition parties have fielded far fewer Brahmin candidates than the BJP. In comparison to the BJP and allies’ 62 Brahmin candidates, the BSP has 54, the SP coalition 34, and the Congress 48. The BSP fielded 62 Brahmins the last time they played, and just four of them won.

Both the BSP and the SP staged a series of meetings in the run-up to the elections to court the Brahmin community. S C Mishra, the BSP’s national general secretary, spoke at such sammelans around the state, while Manoj Pandey, the SP’s state secretary, organised the events.

Despite being out of power in the state for more than a decade, the BSP has maintained its vote share in subsequent elections. In 2007, it achieved an unexpected two-thirds majority by successfully social engineering the upper castes and Muslims into its usual vote bank.

Swami Prasad Maurya, a former BJP minister who is running as an SP candidate in Fazilnagar Padaruna, is one of those who could face a tough struggle as a result of the BSP’s picks. Ilias Ansari of the BSP and Surendra Kushwaha of the BJP are his opponents. Ansari, an SP worker, abandoned the party after Swami Prasad was given the ticket. The BSP withdrew its Brahmin candidate from this race in favour of Ansari.

The BSP has fielded former SP leader Shadab Fatima in Zahoorabad, where SP ally Suheldev Bharatiya Samaj Party leader Om Prakash Rajbhar is running. The BSP’s Naeem is running against the SP’s Yasar Shah in Bahraich, which will vote in the next phases. Anupama Jaiswal, a former minister and incumbent MLA, is the BJP’s candidate.

However, in Raebareli, the BSP’s Muslim candidate may affect the BJP’s Aditi Singh, since she will lose Muslim support that she and her father received when they were both in the Congress.

Mayawati’s lack of “aggression” towards the BJP administration in the polls has also been highlighted by observers. The BSP leader began her campaign much later than the others, and in most of her speeches, she criticises the SP more than the ruling BJP on law and order. She also ran candidates after the SP and BJP had announced their own.

Voters in constituencies like Fazilnagar showed their dissatisfaction with the BSP’s objectives. “Ilias bhai has done wrong by dividing the community’s vote,” says Nasirruddin Ahmad, 45, who has returned home from Mumbai to vote. “Hum to cycle ko daliye, lekin Bhajapa nikal jaibe yahan (We’ll vote for the cycle, but the BJP will win by a razor-thin margin).”