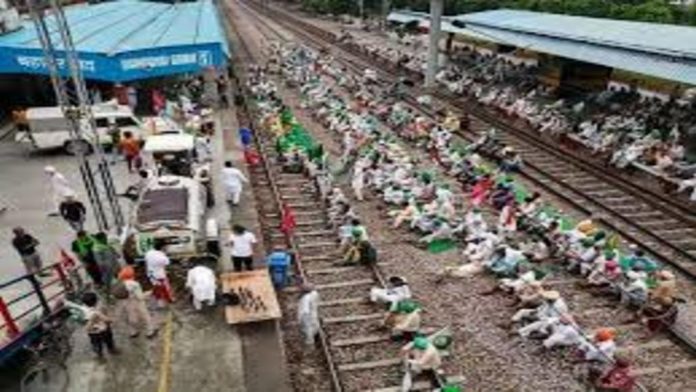 The farmers’ association has called for a six-hour nationwide “Rail roko” movement to demand Union Minister Ajay Mishra’s dismissal and arrest over the Lakhimpur episode in Uttar Pradesh, in which his son was arrested.

The Samyukta Kisan Morcha, an umbrella organization of farmers’ unions, announced that from 10 a.m. to 4 p.m., it will organize a peaceful nationwide rail roko demonstration for justice in the Lakhimpur Kheri violence in Uttar Pradesh.

As part of their protest, farmers in Punjab and elsewhere were observed squatting on rail tracks. According to a railway official, protesters halted four sections of the Ferozepur division. He went on to say that the Ferozepur-Fazilka portion in Ferozepur city, as well as the Ferozepur-Ludhiana segment at Ajitwal in Moga, were also affected.

According to Lucknow police, individuals involved in the rail roko andolan will face consequences, with the National Security Act being enforced against those attempting to disrupt normalcy.

The son of Union Minister of State for Home Ajay Mishra, Ashish, has been arrested in the case, but the farmers’ group claims that justice will not be served as long as the minister is in office.

On October 3, eight persons, including four farmers, were killed in Lakhimpur when a minister’s automobile collided with them. Farmers claim that the minister’s son mowed down the farmers who were protesting.

“In his talks, he (Ajay Mishra) fostered animosity, antagonism, and sectarian strife between Hindus and Sikhs. His cars were used to assassinate nonviolent demonstrators. Even while Ashish Mishra was being summoned by the police, he hid his son and accomplices “a statement from the farmers’ organization

The minister denied the charges, claiming that his son was not present when the incident occurred. His son has reaffirmed his father’s position and disputed the allegations.

According to NDTV, the minister’s son was arrested after he was unable to respond to multiple queries about his location during the violence that purportedly erupted after the truck plowed over farmers. The arrest happened after the Uttar Pradesh government was sued by the Supreme Court.

Last week, a Congress delegation led by Rahul Gandhi requested President Ram Nath Kovind to fire the minister whose son is accused of mowing down farmers demonstrating in Uttar Pradesh. According to the Congress, the President has stated that he will speak with the government about the matter.

Finance Minister Nirmala Sitharaman has called the Lakhimpur event “totally condemnable,” adding that similar incidents occur in other regions of India as well, and that they should be discussed “when they happen, not when it suits others” because Uttar Pradesh is governed by the BJP.