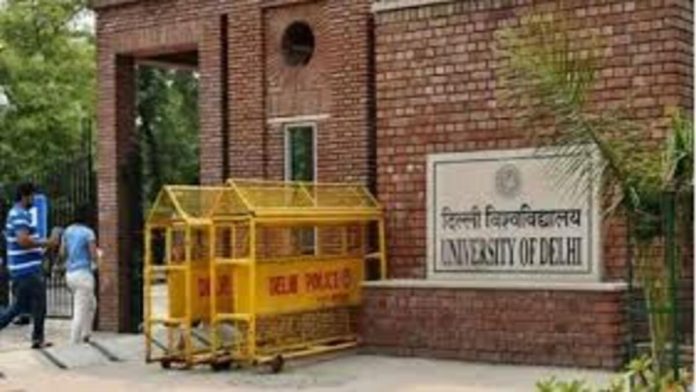 Vice Chancellor Yogesh Singh of Delhi University issued the university’s admission policy for the 2022-23 academic year on Tuesday, stating that eligibility would be determined by the results of the Common University Entrance Test.

Admission to the institution will be via the common exam, which has been made required for admission to 45 of the country’s leading universities. Until this year, cut-off scores in Class 12 board examinations were used to determine admission to Delhi University.

Except for the School of Open Learning and the National Collegiate Women’s Education Board, all undergraduate programmes would be admitted via the Common University Entrance Test (CUET), according to Singh, who called the new admission policy “historic”.

“All applicants, including those seeking admission to supernumerary seats, must appear in CUET-2022. The qualifying requirements will be determined based on the CUET scores “he said

According to Singh, 85 percent of the marks for admission would be collected from the CUET and the remaining 15% will be selected by the colleges for the 50% seats earmarked for minority institutions.

He said that admission to the non-reserved 50% seats would be solely based on the CUET.

Minority colleges such as Jesus and Mary, St. Stephen’s, and Sri Guru Teg Bahadur Khalsa have allocated 50% of their seats for minority students.

According to Haneet Gandhi, Dean (Admissions), applicants would be permitted to take the CUET only in topics that they covered in class 12. She also said that the merit would be determined based on a combination of just those topics in which the applicant has taken the CUET.

“For admission to Delhi University, students must appear in at least one language from each of these components together. The entrance exam’s second round consists of 27 domain-specific subjects. The final component is focused on general knowledge and will only be used for BA admissions “Gandhi said the following.

She said that in order to get admitted to most of the Delhi University’s programmes, an applicant must choose at least three topics from the second part, which includes domain-specific subjects.

The second half is divided into two halves, B1 and B2. Candidates must pick their topics carefully so that they do not choose more than one at a time.

According to Gandhi, eligibility for admission to most B.Sc programmes will be determined by a combination of physics, chemistry, math, and biology. She said that in CUET, getting at least 30% in any one language is required.

A candidate must take the entrance exam in any one language from section one and any three topics from the other part to be admitted to the Bachelor of Arts programme. The candidate’s merit will be determined by the marks earned in the same topic and language.

Candidates must take the CUET Mathematics exam in order to be considered for admission to BA (Hons) Economics. Gandhi said that merit would be determined based on marks earned in the selected language, mathematics, and any two disciplines.

A candidate may take the CUET in a maximum of six disciplines, with one of them having to be a language subject. “Just as we used to pick the best of four subject marks when we had cut-offs,” she said, “today we would consider the best CUET score for admission to Delhi University.”

Candidates for the BBA, BMS, and BBE degrees must appear in one language, mathematics, and section 3 of the CUET. Candidates for BA, B.Voc, and B.Com programmes (sometimes known as “pass” courses) may choose between a language and one domain-specific topic, as well as a general examination or a three-subject test.

Candidates may pick a specific language at CUET or take a test in any other language to be admitted to linguistic programmes. “Those appearing in the specific language, however, will be given priority. After the test, centralised e-counselling would be implemented “Gandhi said the following.

The university will provide e-counselling when the CUET results are revealed. Vice Chancellor Singh said that candidates would be given the opportunity to re-fill their preferences prior to each counselling session.

He believes that three rounds of therapy will be done, with the third being a spot round, and that things will become clearer once the findings are released. Gandhi said that the university’s admissions website, which will include samples, would go online on Wednesday.

He said that the chatbots would also assist applicants with any questions they may have about Delhi University. “A support desk will be available to assist applicants in selecting question papers, and open houses and webinars will also be held to assist candidates,” he added.

School of Open Learning (SOL) and Non-Collegiate Women’s Education Board (NCWEB) admissions will be based on merit. The application procedure for SOL and NCWEB admission will begin on May 6.