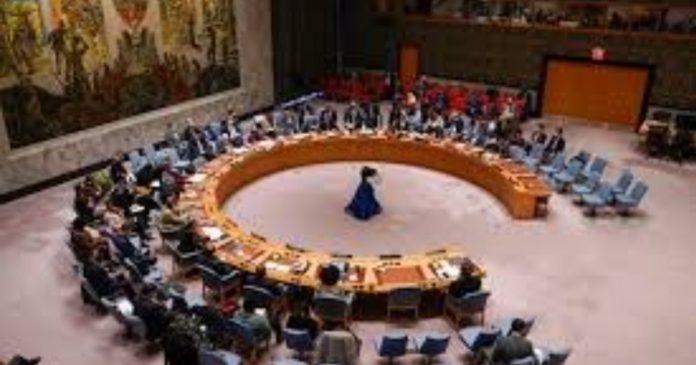 During a day of frantic and sometimes acrimonious diplomacy around the five-day-old war, ambassadors from dozens of nations backed a proposal demanding that Russia halt its attack on Ukraine, as the UN General Assembly held a rare emergency session.

Both of the UN’s primary bodies, the 193-nation assembly and the smaller, more powerful Security Council, took the extraordinary step of having simultaneous, hastily planned meetings on the war, reflecting rising worldwide fear. The UN Human Rights Council voted in Geneva to hold its own emergency session.

The Security Council meeting began with the announcement that the United States was expelling 12 Russian UN diplomats accused of eavesdropping. Meanwhile, officials from Russia and Ukraine met on the Belarusian border, agreeing merely to continue discussing.

He stated that “Russian actions are being twisted and obstructed.” Russia has consistently attempted to pin the blame on Ukraine for alleged abuses of Russian speakers in the eastern regions.

“These hostilities, which were unleashed by Ukraine against its own citizens, were not started by the Russian Federation,” he stated. “Russia is attempting to bring this war to a close.”

The assembly meeting occurred three days after an attempt at the Security Council to condemn and stop Russia’s strike was thwarted by a Russian veto. The meeting will provide an opportunity for all UN members to talk about the conflict.

More than 110 people have signed up to speak, and the event will continue on Tuesday. The assembly, which has no veto power, is set to vote on a resolution coordinated by European Union envoys in collaboration with Ukraine later this week.

The Associated Press acquired a draught resolution demanding that Russia cease using force against Ukraine and evacuate all soldiers immediately. It asks for a “urgent peaceful conclusion” through conversation and negotiations, and it condemns Russia’s “aggression” as well as Belarus’ “involvement” with Moscow.

All envoys were asked to stand for a moment of silence as Assembly President Abdulla Shahid opened Monday’s session. During the hours of remarks that followed, scores of people urged their colleagues to vote yes.

“With the Security Council failing to fulfil its responsibilities, we, the General Assembly, must now rise up and play our part,” said Carolyn Schwalger, New Zealand’s ambassador.

Syria, a Russian ally, accused the West of a “politics of hypocrisy,” saying that other wars haven’t earned the same level of attention over the years.

This historic emergency session on the situation in Ukraine brings to a close the anti-Russian campaign, which began with the West’s provocative and hostile rhetoric directed at Russia in order to inflame tensions in Ukraine and jeopardise Russia’s security, according to Syrian Ambassador Bassam Sabbagh.

Another Russian ally, China, called on all countries to respect each other’s sovereignty and internationally recognised borders, but did not mention the resolution. Instead, Ambassador Zhang Jun emphasised the importance of creating a favourable environment for Russian-Ukrainian discussions and warned against “any action that could aggravate tensions.”

“There is nothing to gain from rekindling a new Cold War, but everyone stands to lose,” he warned.

The Security Council meeting later Monday was focused on the humanitarian consequences of Russia’s incursion, but it began with a tense discussion about Russian diplomats being expelled from the United States. Nebenzia reacted angrily to the expulsions, telling the council that they were again another unfriendly move by Washington.

A dozen ambassadors were involved in undiplomatic conduct, according to US Deputy Ambassador Richard Mills. The 12 were intelligence operatives who were “engaged in espionage activities that are unfavourable to our national security,” Olivia Dalton, a spokesman for the US UN Mission, later stated in a statement.”

With the UN stating that the war is already causing a serious and potentially huge humanitarian and refugee crisis, France and Mexico planned to present a Security Council resolution focusing on humanitarian issues.

“We will demand the halt of hostilities, the protection of civilians, and secure and unfettered humanitarian access to satisfy the population’s essential needs,” French Ambassador Nicolas de Riviere said on Sunday.