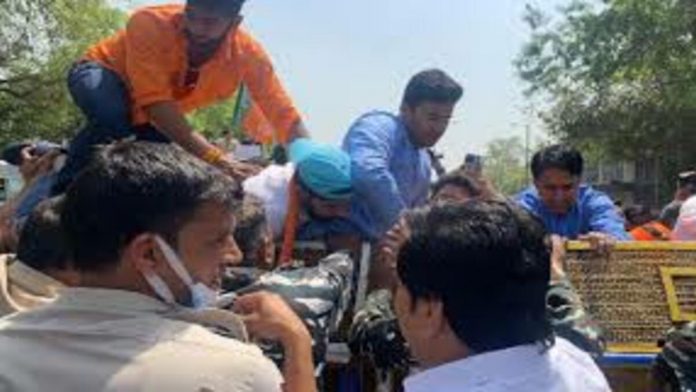 The Delhi High Court on Monday questioned the security arrangements made by the police to prevent the incident and said that it is clear that there was a failure, weeks after nearly 200 protestors from the BJP’s youth wing Bharatiya Janata Yuva Morcha (BYJM) broke through police barricades outside Delhi Chief Minister Arvind Kejriwal’s residence and slammed the main gate.

“An incidence like this may happen at the home of any constitutional functionary, whether it’s the chief minister… a judge, or any other Union minister… Acting Chief Justice Vipin Sanghi and Justice Navin Chawla of the division bench observed, “This is a very distressing state of circumstances that such a thing could happen in the first place, or that such miscreants could succeed in their endeavour.”

“If people can breach three barricades, then you need to really look at your efficiency, your functioning,” the court warned the police, after asking them to explain how the protestors breached the barricades.

The court had previously read the police’s sealed-cover status report. On March 31, it requested that the Delhi Police submit a status report on the probe within two weeks. After reviewing the report, the court stated, “Once there is a security failure, it is something that has to come with penalties.”

“We are absolutely not happy with your findings regarding the bandobast,” the judge added. You’ve only confessed that there was a breach at point A, then point B, and finally point C. “How can the cops be heard saying this?”

The Delhi Police Commissioner should investigate whether the security arrangements were appropriate and the reasons for their failure, according to the court’s judgement issued on Monday. The court also ordered the city’s chief cop to take responsibility for the lapse “which admittedly occurred” and set the next hearing date for May 17.

The court was hearing AAP MLA Saurabh Bhardwaj’s petition for the formation of a special investigation team (SIT) led by a retired high court judge to conduct an independent investigation into the attack.

Bhardwaj also demanded an investigation into the involvement of police officers in maintaining the security perimeter outside the chief minister’s residence. The lawsuit also requests that an earlier court order for protecting the road outside Kejriwal’s apartment be followed.

Bhardwaj accused the Delhi Police of utterly ignoring their responsibilities, alleging that the cops “were hand in glove with the thugs since the goons are members of the ruling party in the national government,” which controls the force. He said that there had been an attack on the deputy chief minister’s residence in the past, and that the police had failed to stop the attackers.

“It is because of the police’s apathy and complicity that BJP goons have gained the confidence to carry out repeated attacks on elected officials of the Government of the NCT (National Capital Territory) of Delhi,” Bhardwaj said in the appeal.

Bhardwaj also claimed that if attacks on elected politicians in Delhi become commonplace, the people will lose faith in the rule of law if accountability is not assigned.