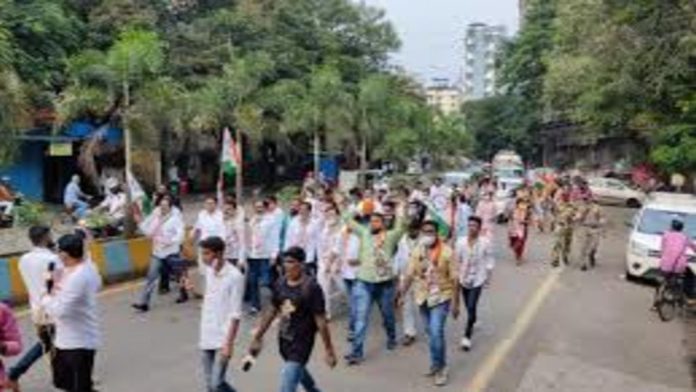 Commuters in Mumbai were stranded this morning after the Maha Vikas Aghadi or MVA government declared a bandh in support of farmers in Uttar Pradesh, a week after eight people were killed in violence during a farmers’ protest in Lakhimpur Kheri, UP.

Maharashtra Minister Nawab Malik said today that the shutdown is “being observed peacefully” amid popular support, but that “some incidences of individuals throwing stones have been reported.” “Left, other parties, and trade unions have backed the coalition’s request for a bandh. The bandh is taking place in a peaceful manner “he stated

“We demand the resignation of Union Minister Ajay Kumar Mishra,” Mr Malik added, referring to his son Ashish, who has been arrested in connection with the death of farmers in Uttar Pradesh. He issued an appeal during the bandh: “There have been reports of people throwing stones at various locations, which is not correct. Such acts should not be pursued by anyone.”

At a joint news conference on Sunday, the Maharashtra Vikas Aghadi government, which includes the Shiv Sena, Congress, and the Nationalist Congress Party or NCP, declared the bandh. Workers from the Shiv Sena were seen patrolling the streets of Thane today, halting cars. Buses mainly stayed off the roads in Mumbai.

Except for vital services, the state government said that everything will be closed on Sunday. The Agricultural Produce Market Committee, often known as the sabzi mandi, is closed as well. During the shutdown, Shiv Sena workers were seen combing the streets of Thane and stopping cars.

The Mumbai Police have devised a strategy to guarantee that the public is not inconvenienced. Police officers are stationed at strategic locations. Three Central Reserve Police Force companies, 500 Home Guards, and 700 other forces are assisting the Mumbai Police Department in maintaining peace and order. Mumbai Police tweeted this morning, “Local trains are operating on their regular timetable, so you can plan your day appropriately.”

A Maharashtra trade union that had previously disapproved has now decided to endorse the bandh. “We have decided to keep businesses closed until 4 p.m. in support of the shutdown call,” Viren Shah, chief of the Federation of Retail Traders’ Welfare Association (FRTWA), said in an amended statement on Sunday, in response to the Shiv Sena and other party leaders’ request.

The traders’ union had previously stated that they are only crawling back to work following periodic lockdowns due to the COVID-19 outbreak, and that the bandh will have a negative impact on their revenues. “Due to lockdown, we’ve lost a lot of money over the last 18 months. Our business is gradually improving. Let us do our business peacefully in the middle of the festival season, when people have begun to come out to shop. We hope that business owners are not hounded or compelled to close their doors “Mr. Shah has stated previously.

The traders, on the other hand, look to be caught in a political crossfire, as the BJP has stated that “forced store closures” in support of the bandh will not be tolerated. “If any of the MVA karyakartas compel shopkeepers to close their doors tomorrow, they will confront BJP karyakartas. Police should guarantee that no one is pushed, or else a law and order crisis would arise, which is not our responsibility “Nitesh Rane, a Maharashtra BJP politician, took to Twitter.

Ashish Mishra, the son of Union Minister Ajay Mishra, was mentioned in a police report submitted by farmers who claimed he drove into a crowd of slogan-shouting demonstrators during a peaceful black-flag rally last Sunday.

On Saturday night, Ashish Mishra appeared in court, days after enormous pressure mounted on police inactivity despite the filing of a murder charge. The UP Police had also been chastised by the Supreme Court for not doing their duties adequately.